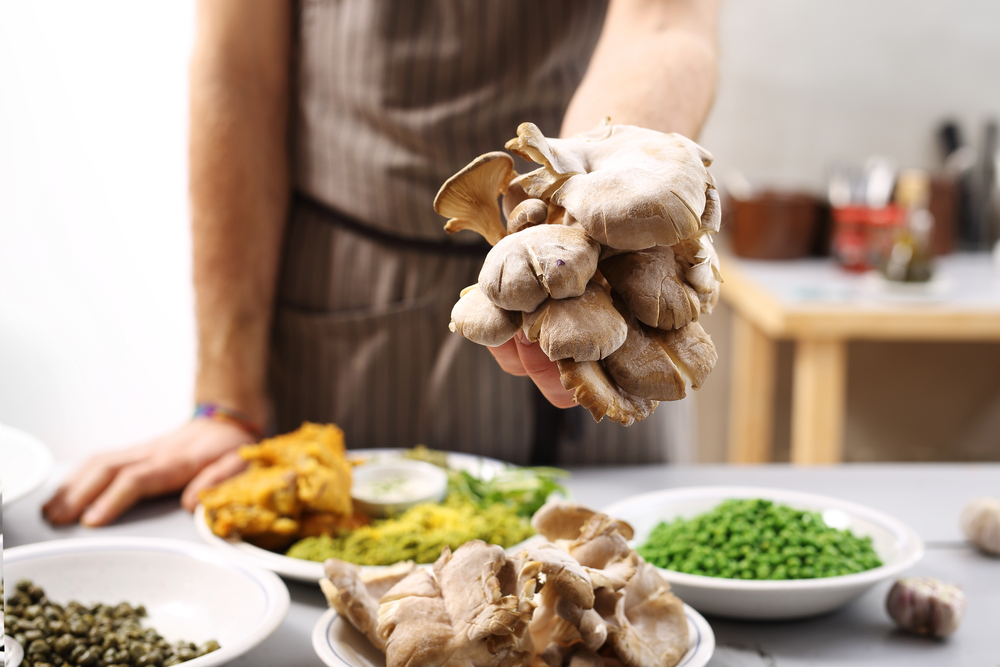 21 Aug Mushroom for Thought: A Vegan Friend or Foe?

Mushrooms have and continue to form a stable base of many vegetarian and vegan diets, thanks to their delicious umami flavour and nutrient density. But with our fungi friends taking up a renewed spot in the limelight recently with all focus on their adaptogenic properties, another interesting conversation has surfaced. Are all mushrooms even vegan?

After all, isn’t veganism all about avoiding foods that come from animals such as meat, eggs, dairy, honey and leather among others? When it comes to the vegan mushroom there might be more to it than meets the eye.

SO, ARE ALL MUSHROOMS REALLY VEGAN?

Before we answer this question, we need to first understand just what constitutes ‘vegan’ or ‘veganism’.

The term “vegan” was first introduced in 1944 by a group of vegetarians who formed the Vegan Society after they broke away from the Leicester Vegetarian Society. Vegans do not consume meat and any product that originates from animals, such as dairy and eggs. They also exclude all forms of cruelty and exploitation to animals for food and any other purpose.

Generally, mushrooms are vegan since they are not animals but rather fungi that feed on deadwood and organic matter where they grow. However, the controversy arises with other types of mushrooms such as the oyster mushroom.

The controversy is not because of their name but because of what oyster mushrooms consume as their food source. Since they live on the trunks of deadwood, only a small amount of nitrogen is available to them. To supply their diet, they attract and feed on nitrogen-rich prey, which includes nematodes such as small roundworms. Mycologists first discovered this in the 1970s.

Because oyster mushrooms along with some other types act as a predator to small organisms, an argument arises on whether to consider them as vegan or not.

This issue is one of the vegan gray areas. The blog Dallas Vegan ran a poll on whether oyster mushrooms should be considered vegan and the participants arrived at a consensus. Many of them agree  – the fungus including its oyster variety are vegan. Their argument lies in the fact that we cannot be 100 percent sure that the soil in which the vegetables grow does not contain earthworms or dead insects. The same is true for mushrooms. It would be odd to say that oyster mushrooms are not vegan when the vegetables you eat may also grow in a soil that contains decomposing animal matter.

Whether you agree that they are vegan or not is ultimately your personal decision, but sure makes for an interesting conversation about where we all draw our personal lines.

MUSHROOM AS A MEAT SUBSTITUTE

Mushrooms have a distinct umami flavor that many liken to chicken, seafood or meat. They are also versatile as you can prepare them by just adding garlic and butter or as a component of soups, pizzas and a wide range of dishes. They’re healthy too, making them even more popular as a meat substitute.

An article published by Healing Mushrooms discusses how mushrooms are considered as adaptogens. Mushrooms can stimulate a weak immune system, helping the patient fight back infections. For those with a very active immune system, mushrooms can also aid in balancing it, preventing allergies and soothing patients with autoimmune diseases. Because of the mushroom’s ability to regulate our body’s system, they are considered adaptogens.

Moreover, mushrooms also contain other essential vitamins and minerals good for our body:

Moreover, mushrooms have a low-calorie content which makes them a suitable substitute for those craving for meat but who want to lose weight.

EASIEST MUSHROOMS TO GROW IN SUPPORT OF A VEGAN DIET

If you love eating mushrooms, why not grow your own? Growing your own vegan mushrooms allows you to grow these delicious fungi organically.

Organic vegan gardening is different from the usual type of gardening as it avoids the use of toxic sprays and chemicals (which would in turn harm other insects and garden creatures) as well as manures and other animal products as fertilisers. Instead, this type of gardening uses vegetable composts and green manure to maintain soil fertility. It applies other sustainable methods such as mulching and crop rotation.

There are mushrooms that are really easy to grow even for beginners, ironically the oyster mushroom is one of them:

Other easiest mushrooms to cultivate include:

If you are a beginner, you could start with a mushroom growing kit, available online or possibly at your local nursery. Depending on the type you are growing, you could use wood chips, coffee grounds, straw and organic debris as the medium.

I hope this provided a little interesting food for thought on where your shrooms come from and some appreciation on how much they can enrich your diet of choice.

The Marvels of Medicinal Mushrooms