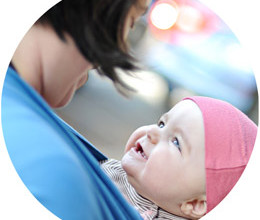 29 Sep The Benefits of Wearing Your Baby

Babywearing has been practiced for centuries. In ancient civilizations, mom needed to have baby close while tending to everyday chores, such as tending crops. Babywearing was born out of necessity for baby’s survival and mom’s ability to work. Fabric weaving and rough terrain delayed the invention and use of baby carriers with wheels. “With little but herbal remedies and ancient rituals to protect newborns from high infant mortality rates, being next to mom was the best way for a child to survive and thrive” (Krauss).

From the time of the Industrial Revolution in Europe and America through to the 1950s, baby carriers became taboo. Mothers in the lower, laboring class had to take jobs where they weren’t able to bring their babies along with them. While mothers in the upper, leisure class avoided anything messy including their own babies. It was the children of the laboring class mothers and the nannies of the leisure class mothers that handled childcare.

But with the flurry of civil rights and social justice movements, the 1960s saw a baby carrying revival. “The swaths of fabric were still the choice, tied (and tie-dyed) in sling, back, and front positions. Breastfeeding was also back in and completing the pattern, babywearing was part of a more relaxed lifestyle that spread during this and the subsequent decade” (Krauss).

And lucky for us and our children that babywearing is now seen as a respected and intelligent practise to incorporate into caring for our babies, because the benefits to the whole family, and ultimately our society are numerous.

A study at Columbia University compared the levels of attachment of babies carried in a baby carrier vs. babies carried in a car seat. Results indicated that, at 13 months old, babies who were carried in wearable carriers were significantly more likely to demonstrate a strong and secure attachment to their mothers (Anisfeld, Casper, Nozyce, & Cunningham, 1990).
Lowers incidence of illness Studies have shown that babywearing is linked to lowering the incidence of SIDS (sudden infant death syndrome), behavioral disorders and postpartum depression in mothers (Babywearing, 2010).

Babies in a content and safe environment are able to be more alert and aware of their surroundings, providing the perfect environment for learning. This also provides the parent with an opportunity for increased interaction and bonding time with their baby. Carried babies are able to learn language more quickly since they are positioned at voice and eye level. They become more involved in conversations and begin to learn how to listen (Sears).

Provides a sense of organization

The rhythms of the parent walking, heartbeat, etc. provide a balancing and soothing effect on babies (Babywearing, 2010). According to Dr. Sears, “regular parental rhythms have a balancing effect on the infant’s irregular rhythms. Babywearing ‘reminds’ the baby of and continues the motion and balance he enjoyed in the womb” (Sears).

Infants are physically closer to people and intimately involved in their caregiver’s environment. According to Dr. Sears, “baby becomes aware of, and learns from, all the subtle facial expressions, body language, voice inflections and tones, breathing patterns and emotions of the caregiver.” Babies are exposed to the all the aspects of being human through their caregiver, increasing social development (Sears).

Provides fathers with a soothing touch

Provides fathers with a soothing touch

A father who participates in babywearing can actually soothe a fussy baby. Fathers can hold babies close and talk, hum or sing which is calming to babies (Asaff, 2009).

Prolactin and oxytocin levels in the mother are increased through contact with baby. Increased levels of mothering hormones leads to easier breastfeeding, more responsible mothering and a more secure maternal bond (Babywearing, 2010). Additionally these hormones inhibit the negative impact of stress on the mother
(O’Mara, 2010).

Normal environmental sounds have the potential to be both a learning and a disturbing experience. When alone and not held, babies can be frightened by sounds. When carried, babies use these sounds as a vehicle for learning. The caregiver provides soothing words to help the baby overcome fears, providing the baby with a positive association between the caregiver’s voice and the disturbing sounds. Now the baby is more comfortable with the environment and ready to explore with confidence (Sears).

Carrying baby enables the caregiver to have both hands free. Caregivers have the freedom to care for other children while carrying their baby close (Sears).

Provides a sense of calmness

Baby’s primal needs are being met by being carried, thus providing a calming effect on the baby (Babywearing, 2010).

Adheres to our biological nature

Babies are born with the natural grasping reflex to cling to their mothers. Babywearing fulfills this natural instinct (Stay At Home Mum, 2009).

Purchase One Of Our Fabulous Organic Cotton Moby Wraps

This syndrome is caused by the babies spending too much time in car seats or sleeping on their backs. The American Academy of Pediatrics recommends that babies should spend minimal amount of time in car seats when not used in a motor vehicle. Babywearing does not require babies to lie flat, thus no pressure is placed on the baby’s head. Additionally, babies can be carried while they sleep, further reducing the amount of time they spend flat on their backs (Babywearing, 2010).