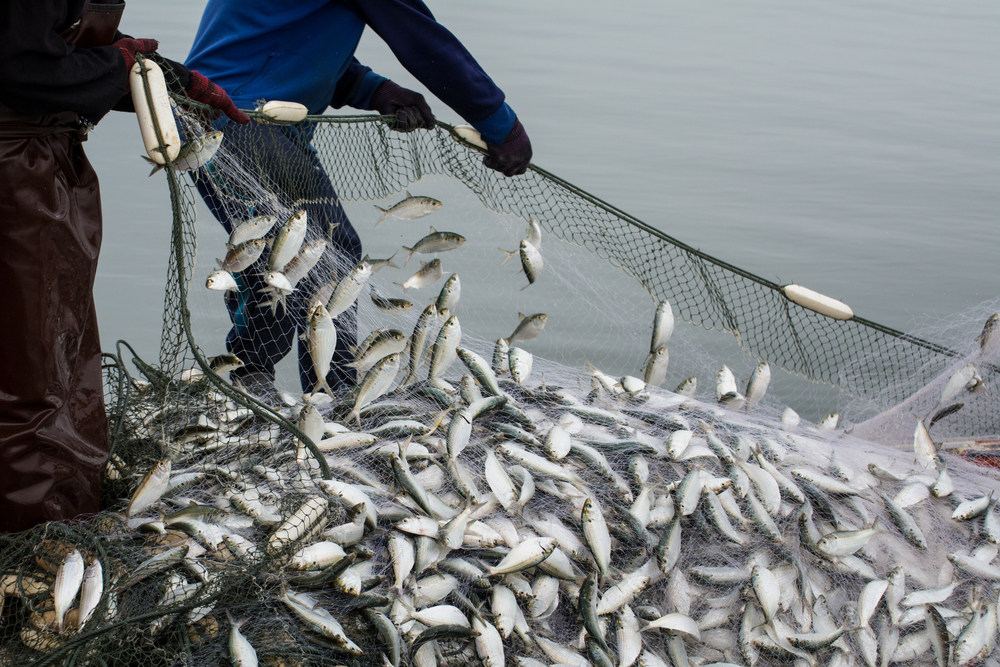 25 Apr Should We still Eat Seafood?

Posted at 12:04h in Faithful to Nature by Nadia Krige 0 Comments
0 Likes

From kicking off the summer holidays enjoying good old fish-and-chips at Cape Town’s famous Kalky’s to giggling with the girls while sipping bubbly and snacking on salmon roses, seafood certainly holds a special, somewhat celebratory, place in our culinary culture.

Plus, opting for ‘the fish’ instead of tucking into a juicy steak, eases the conscience of many meat-eaters for both health and ethical reasons.

That’s slowly starting to change, however, as the dire reality of dwindling fish populations, plastic pollution and climate change are pushing us to rethink our fondness for sushi-soaked date nights and the comfort of deep-fried hake.

According to the Food and Agriculture Organisation of the United Nations (FAO), fish accounts for 17% of the global population’s intake of animal proteins. While certain coastal communities, who rely on seafood for subsistence, simply don’t have a choice, many of us do… and it’s our responsibility to make the right one.

Currently, 33.1% of global marine fish stocks are overfished and 59% fished at maximum sustainable levels, as fisheries aim to satiate the world’s growing appetite for seafood.

Perhaps the best way to understand this conundrum we find ourselves in is to delve a bit deeper into a few of the forces driving seafood consumption and explore some counter-arguments.

SEAFOOD: ESSENTIAL TO A HEALTH DIET

While there are many factors that have driven the increase in demand for seafood, one of the most prominent could be the fact that fish is touted as the healthiest choice when it comes to animal protein.

White flesh fish, in particular, is a staple ‘gym food’ menu item for anyone looking to increase their protein intake, while avoiding harmful fats.

A quick google search for ‘weight loss plans’ or ‘healthy protein sources’ will prompt the reader to add more fish to their daily meal plan.

In more recent years, Omega 3 has become something of a buzzword for anyone remotely interested in their health and wellbeing. And with good reason: these long chain fatty acids are anti-inflammatory and have proven to be a powerful weapon against everything from Alzheimer’s and dementia, to depression and ADHD, as well as heart disease and stroke.

While you will find Omega 3 in certain nuts and seeds, as well as leafy vegetables and berries, cold-water fatty fish, are believed to be the richest source of these healthy fats.

As recently as 2017, the American Heart Association recommends eating fatty fish at least twice a week to increase Omega 3 intake.

ON THE FLIP SIDE:

Although the benefits of adding fish – both lean and fatty – to our diets have been proven, a number of legitimate health concerns have also reared their ugly heads recently. And, once again, we’re to blame.

One of the concerns that has been receiving quite a lot of attention lately, is that of mercury contamination. While this metal occurs naturally throughout the environment, widespread industrial activity is pushing airborne mercury levels up at a terrifying rate. And as we all know, what goes up (into the air), must come down (into the water).

As mercury infiltrates marine ecosystems, it is absorbed by algae and other plants, which are eaten by smaller fish species, which – in turn – are consumed by larger fish.

Eating certain fish species – especially the larger, predatory ones, like tuna – on a regular basis, could put humans at risk of excessive exposure to this potentially toxic heavy metal.

Health risks associated with high levels of mercury in our bodies include neurological damage, such as memory loss, decrease in fine motor skills and attention deficit. Mercury exposure can also increase blood pressure and the risk of heart attack.

“Once this mercury gets into the marine food chain, it ‘bioaccumulates’ in the larger predators. That’s why larger fish are generally riskier to eat than smaller ones,” reads an article on Scientific American.

Then, of course, there is fact that we are finding plastics in whales, turtles, seabirds, as well as mussels, oysters and fish!

As a relatively recent problem, the effect this may have on human consumption of fish and shellfish is not yet clear, although we can probably agree that it certainly couldn’t hold any benefits.

As Elizabeth Royte points out in an article for National Geographic: “It’s difficult to parse whether microplastics affect us as individual consumers of seafood, because we’re steeped in this material—from the air we breathe to both the tap and bottled water we drink, the food we eat (like table salt and teabags), and the clothing we wear.”

WHEN MARINE SCIENTISTS OPT OUT OF SEAFOOD CONSUMPTION

Perhaps the most poignant answer to the question “should we still be eating seafood?” comes from the people who have dedicated their lives to studying the oceans and the creatures that call them home.

Spoiler alert: it’s a resounding ‘No’.

When it comes to marine biology, oceanography and exploration of the deep, you will be hard pressed to find a more legendary personality than Sylvia Earle. Having led more than 50 expeditions and clocked in excess of 7,000 hours underwater, there are few people who know the ocean better than Earle does. And what does she say about opting for ‘the fish’?

In a Q&A with TED, following her famous 2009 ‘My wish: Protect our oceans’, she states:

“If people really understood the methods being used to capture wild fish, they might think about choosing whether to eat them at all, because the methods are so destructive and wasteful. It isn’t just a matter of caring about the fish or the corals, but also about all the things that are destroyed in the process of capturing ocean wildlife.”

Taking a somewhat different tack, Laura McDonnell, a fish biologist at McGill University who studies how climate change affect the African cichlid, made a strong case against eating fish in a recent article for The Walrus:

“Over the past nine years, I’ve seen, read, and heard about what happens to fish before it ends up on our plates. And now, whenever my friends order sushi takeout, or my dad enjoys his breaded fish fillets, or even when my cat eats his ‘seafood medley’ dinner, I get nervous—not just for the fish, but also for my loved ones,” she writes.

While Earle and McDonnell’s opinions may have found some prominence (but also their fair share of resistance) on the internet, you are bound to get the same response from almost anyone intimately involved with the protection of ocean life.

CAN AQUACULTURE SAVE THE DAY?

Fish farming or aquaculture is one of the ways in which our seafood consumption could possibly be made safer and more sustainable.

According to FAO, aquaculture is probably the fastest growing food-producing sector and now accounts for 50 percent of the world’s fish that is used for food. About 580 aquatic species are currently farmed all over the world, representing a wealth of genetic diversity both within and among species.

“Although it is one of many possible solutions to the problems associated with wild-caught fisheries, we need to be cognisant of the varying impacts surrounding farmed fish,” says WWF-SASSI.

Some of the risks associated with aquaculture include widespread disease outbreaks due to high densities and high use of antibiotics to manage this. Ironically, many fish farms also use feed made from overexploited wild fish populations.

In the past, sensitive habitats such as mangrove forests were also destroyed in order to make space for pond farms.  Mangroves are, of course, important breeding and nursing habitats for many fish species.

“While there can be many risks in aquaculture, negative impacts can be mitigated through effective management,” concludes WWF-SASSI.

In her Q&A with TED, Earle also shares a few ideas about aquaculture, stating:

“A smart aquaculture system is not one that is in the ocean or even in a natural body of water, but one that is designed like an aquarium, functioning like a big figure eight: plants on one side, fish on the other. The plants go to the fish and the nutrients go to feed a vegetable garden, with sunlight driving it all.”

In South Africa, Aquaculture has been identified as a critical industry. Despite this, as the FAO points out, the local aquaculture sector has performed below its potential and remains a minor contributor to national fishery products and the country’s GDP.

Fresh water species currently being farmed in South Africa, include trout, tilapia, catfish and carp. Among these, rainbow trout farming has been around the longest, dating back to the late 1800s. The major areas of production of trout occur in the Western Cape and Mpumalanga regions and in 2010 contributed to the total aquaculture production, approximately 950 tonnes

As far as marine aquaculture is concerned, the most commonly-farmed species include abalone, oysters, prawns, mussels and seaweed.

According to FAO, abalone is by far the largest marine aquaculture subsector in South Africa and largely occurs in the Western Cape with the majority of farms situated in the Overberg region. Despite this, abalone poaching still remains rife throughout the province.

Of course, calling for an end to seafood consumption will always be something of a thorny issue, especially when it could be seen as a direct threat to the livelihoods of small-scale and subsistence fishers.

Fortunately, there are ways to ensure that – if you should continue eating fish – there are ways of ensuring that you’re making the most sustainable choice possible.

One of these is the easy-to-use WWF-SASSI app, which allows you to check the sustainability of your seafood choice in real time.

It basically allows you to find out whether to tuck in, think twice or avoid altogether within a few quick clicks.

Using a ‘traffic light’ system, the app lists different fish species under ‘green’ that are the most sustainable choices from the healthiest and most well-managed populations, farmed or fished in a way that does not harm the ocean; ‘orange’ if the species is depleted, cannot sustain current fishing pressure or fishing/farming methods have been used that raise ecological reasons for concern; and ‘red’ if they come from unsustainable populations, have extreme environmental concern, lack appropriate management or are illegal to buy or sell in South Africa.

Red listed species include West Coast rock lobster, Red stumpnose (Miss Lucy), Cape salmon (also known as Geelbek) and all species of kob (commonly called kabeljou). There are a number of prawn species also on the red list, and a few on the orange list.

Visit the WWF-SASSI website to explore the list in more depth or take a look at the app.

In the end, the only thing that is really going to help us navigate the rough waters of ‘to eat or not to eat’, is to educate ourselves adequately.

Apart from the app, WWF-SASSI does a lot to raise awareness and inspire action around sustainable seafood choices. Their website offers a wealth of resources, including a downloadable activity book for Gr R – 7 children and various research publications.

Other helpful websites include:

What Our Number 1 “R” Should Be Right Now: Refuse

Can Seaweed be the Answer to Our Plastic Problem?