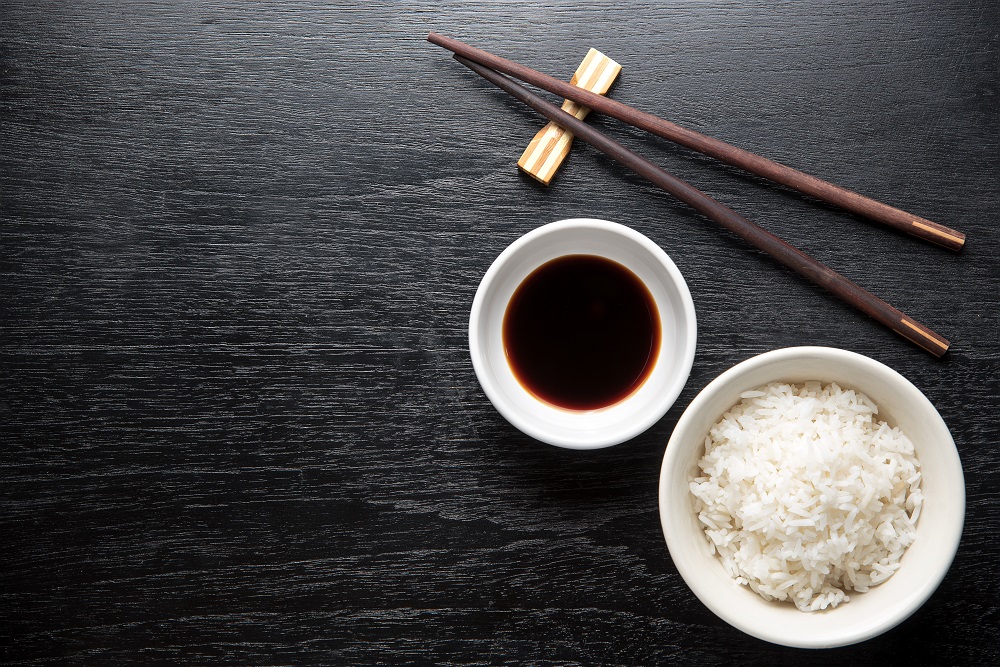 04 Jul The Low-Down on Soy Sauce

Something of a holy grail, after the rote sweet, sour, salt and bitter, there is a “fifth flavour” known as umami that has garnered attention for its pivotal effect in the savoury bouquet. Studies confirm that our mouths contain taste receptors for this moreish taste, and it may be that we seek it out because as infants, our mother’s milk was rich in umami. And if it’s in mother’s milk, Mother Nature must have a reason.

A little culinary trick for hitting this oh-so-satisfying spot is to reach for a bottle of soy sauce. Soy or soya sauce is a traditional Asian condiment that embodies that alluring culinary fifth element, umami. It is made by fermenting water and soya beans, using bacterial and fungal cultures. There has been much bewildering debate around soya. Terms such as allergen, MSG and gluten float around in a mix that can be hard to untangle.  What is the real lowdown on soy sauce? This is a topic as complex as trying to describe the taste of umami.

Soy beans are known to be an allergen for some, but recent research suggests that soya sauce might be a much less allergy-triggering form of soy itself, and might actually have beneficial qualities that support our immune systems. A key factor may be that real soya sauce is naturally fermented. The fermentation process breaks down many allergy-triggering proteins, lowering the risk of allergic response.

Fermentation makes soya products more digestible and the nutrients more easily absorbed, and therefore healthier overall. Eating food in the traditional way our ancestors did invariably has a multifaceted health wisdom that we haven’t yet come to appreciate fully. Many brands on the shelf don’t use the traditional fermentation process in order to save time and money. Look out for acid-hydrolyzed soya protein sauce, which is not the same thing as the real deal.

Dr Mercola’s take on soya is that can be very healthy, but he stresses, only if it is organic and properly fermented. A long fermentation process ensures the phytate and anti-nutrient levels of soya beans are reduced, and their beneficial properties become available.

One of the main benefits of fermented soya is that it is the best food source of vitamin K2 which is essential for preventing osteoporosis, cardiovascular disease, diseases of the brain such as dementia, and even protecting you from various cancers. Vitamin K acts synergistically with vitamin D to keep you healthy.

It seems that umami may play a role in overall digestive health, from mouth to gut. Umami taste receptors are thought to exist in the gut too, so it is interesting that soya sauce has been found to improve digestion by increasing gastric juice secretion, in the same way it induces salivary secretion.

Shoyuflavones are isolflavones with an anti-inflammatory effect, and real, fermented soya sauce has an antioxidant profile that outstrips red wine. Soy sauce is a great source of vitamin B6, important for good mood neurotransmitters.

However, when it comes to our delicate nervous systems, soya sauce has also gotten a bad rap.

MSG (Monosodium glutamate) is an amino acid that is known to have a stimulatory effect on the nervous system, inflaming the nerves that affect our taste. It is used by food manufactures to enhance the irresistibly appealing umami flavour, enticing you to want more and more. There have been concerns that excessive MSG can have detrimental health effects. The neuroscientist Dr. John Olney called the repetitive inflammatory responses caused by MSG excitotoxicity, leading subsequent researchers to describe MSG as an excitotoxin. He found that MSG could potentially cause brain damage and nervous disorders, as well as radical hormone fluctuations.

When it comes to choosing your soy sauce, watch out for MSG added to artificially enhance flavor. The naturally occurring glutamates in food aren’t dangerous, it’s processed free glutamic acids like MSG that you need to worry about.

Most studies found a very large difference between the levels of free glutamate in MSG versus the amount in soya sauce. This may be why soya sauce does not seem to be associated in research studies with allergic symptoms in the same way as MSG. Glutamate occurs naturally, and is found in many other foods, including tomatoes, walnuts, pecans, Parmesan cheese, peas and mushrooms.

So do you get gluten-free soy sauce or don’t you? Soya sauce is traditionally made using wheat, and for those with Celiac or a sensitivity to gluten, it can be simply a no-go. What you may not know, is that there is a gluten-free variant ready to step up to your plate, as it were. Tamari is a Japanese form of soya sauce, a byproduct of miso paste that has been through a thorough process of fermentation. It is made with very little to no wheat and can be used instead of soy sauce by those sensitive to gluten; just make sure you check the label to verify it’s gluten-free. Soy sauce derives most of its flavour from wheat fermentation, while tamari’s flavour comes from amino acids derived from soya protein. Tamari has a deeper, mellower flavour than soya sauce and is a little less salty. It also contains more protein than regular soya sauce and is a source of mood-enhancing tryptophan. It shares many of the health benefits of properly fermented soy sauce too.

Overall, the lowdown on soy sauce seems to boil down to being proactive as to the quality and variety you choose. Be sure to look out for organic soya sauce, to avoid unwanted pesticides and genetically engineered soya beans or wheat, and use your own savvy too – if you know or suspect a soya allergy or a sensitivity to glutamates, you should use your discernment, or consult a healthcare provider, before using soya sauce in your diet.

Health Connection Tamari, R80
“I’ve used this instead of soy sauce for a couple of years and love it. Has a great flavour and is wonderful in almost any dish including salads.” – Kaeyla

Kimono Organic Shoyu Sauce, R89
“It is by far the best organic non-GMO soy sauce available in South Africa and it is the only one we use. It tastes identical to traditional Japanese soy sauce and is a must-have if you’re making sushi at home.” – Maria D