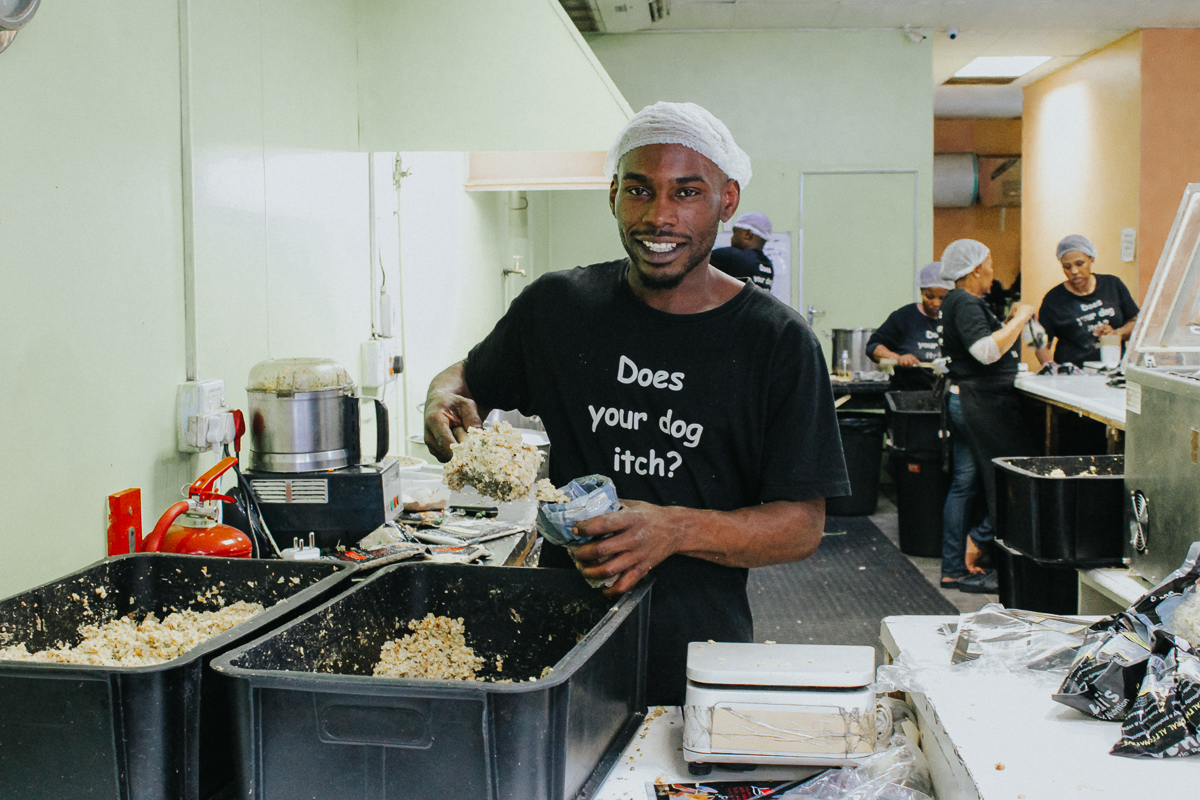 It’s 10:30 on a Monday morning and the Vondi’s Holistic Pet Nutrition shop in Sea Point is bustling. Beyond all the doggie treats and cat toys that greet you upon entering, an impressive food production line is in progress to my left and, to my right, large boxes are being prepared for delivery in Joburg.

Behind the production line, large gas stoves groan under the weight of simmering pots and the scents of wholesome meals and freshly-baked biscuits fill the shop. I watch as countless pairs of industrious hands work efficiently to prepare and package sachets of freshly-cooked veggies, grains and meat. On the other side, someone’s rolling out bright green, Spirulina-infused dough and pressing out flower-shaped biscuits.

“The most important thing about our shop is that it’s open and transparent. The pet food industry has a bad reputation of hiding stuff. You don’t know what goes into your pet’s food. So, we want people to see exactly what goes into the Vondi’s food they’re buying for their beloved animals,” explains owner, Paul Jacobson, as he gives me a whirlwind tour. “Nothing is hidden behind walls or doors. We display the work being done on a TV above the till counter.” 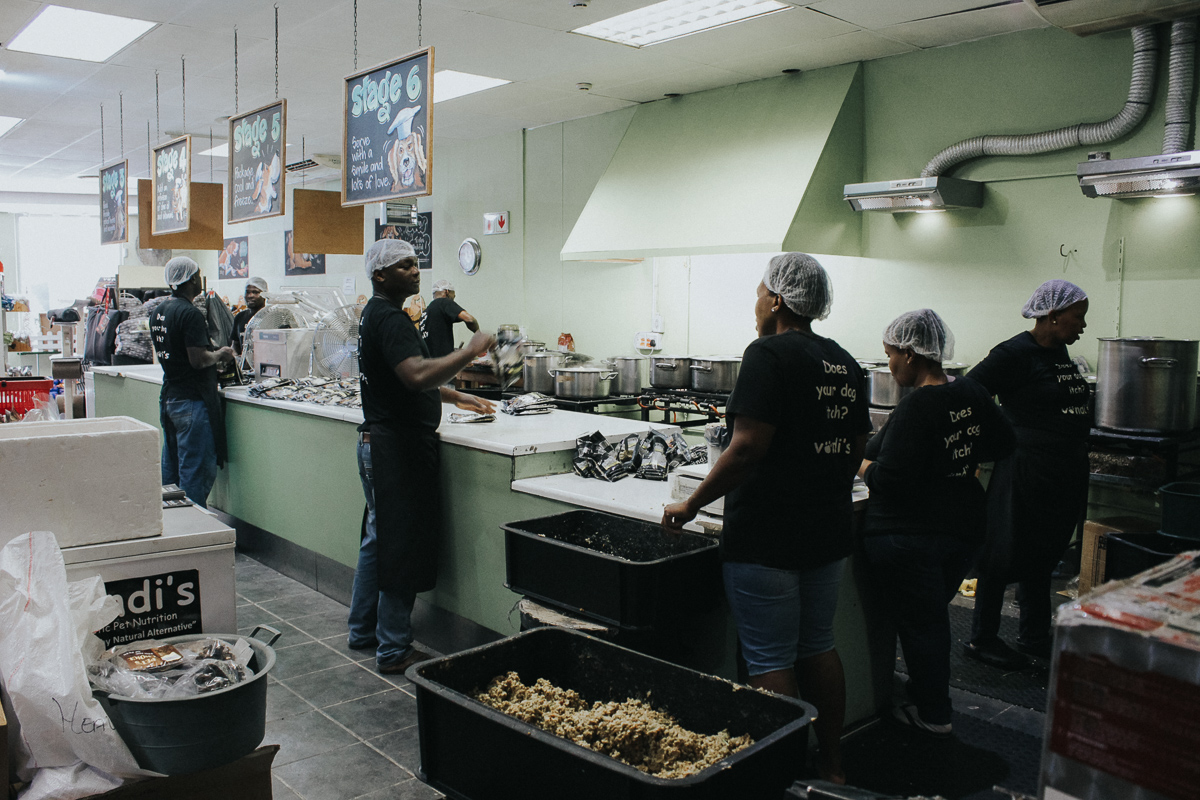 Apart from the fact that they prize honesty with their clients, Paul and his team also aim to keep their carbon footprint as small as possible.
They use gas, instead of electric stoves, for meal-prep and, furthermore, they transfer the food into Wonderbags under the counter to complete the cooking process, rather than letting the gas burn for extended periods of time. This also assists in making the grains they use in their pet food recipes more digestible.

They do currently still use plastic for their packaging, as biodegradable materials are unfortunately just too expensive for most clients’ pockets at this stage. Fortunately, the plastic they use is high micron and can be reused.
Curious about Paul’s passion for pet nutrition and wellness, we sat down for a coffee to discuss what they’re doing with Vondi’s in more detail:

WHAT INSPIRED YOU TO START THE BUSINESS?

Well, actually, I didn’t start it. A small little homeopath was producing this type of diet about 20 years ago. My dog, Chester, was struggling with skin disorders, so we eventually heard about a lady named Eleanor, who was making food from home and selling it to a couple of locals here.  That’s how I came to support her.
Chester sadly just died of eating nachos – one got lodged in his throat. If it wasn’t for that, he would probably have gone on for a lot longer.
Anyway, Eleanor was a small operator who had a couple of beautiful pet food recipes. I had always been in restaurants – as a chef – and liked the idea of getting away from working with humans. So, eventually we decided that I’d take the business over from her.
From a small operator with just a few staff members, we’ve grown into a recognisable brand that employs many people.

WHERE DOES THE NAME “VONDI’S” COME FROM?

Vondi was the name of the previous owner’s Belgian Shephard. The reason why Eleanor’s pet food started becoming so popular, was because everyone was seeing how well Vondi performed and how healthy he looked.

WHAT PRODUCTS DID YOU START WITH?

We started with food first – the recipe Eleanor had been making – and one range of biscuits. We haven’t done anything different with the food. We’ve still got six lines. The biscuits, we expand all the time to include different ingredients, like coconut oil (which is one of our biggest sellers now).

Then our remedies – at one stage we only had a vitamin mix. But now we do a whole range of items now, including spirulina, fish oil and rooibos. This part of the business has grown quite a bit because we feel it completes holistically the nutritional side.

WHERE DO YOU SOURCE YOUR INGREDIENTS FROM?

It’s very important for us to make sure that everything is natural and ethical. So, with the meat, we pay a premium, buying it from a certified supplier who is registered themselves as a pet food supplier. Then, we get our wholegrains from Sasko and we’ve confirmed that they are not genetically modified. Our vegetables are bought through a fresh trading supplier here. And our olive oil is all South African-produced. 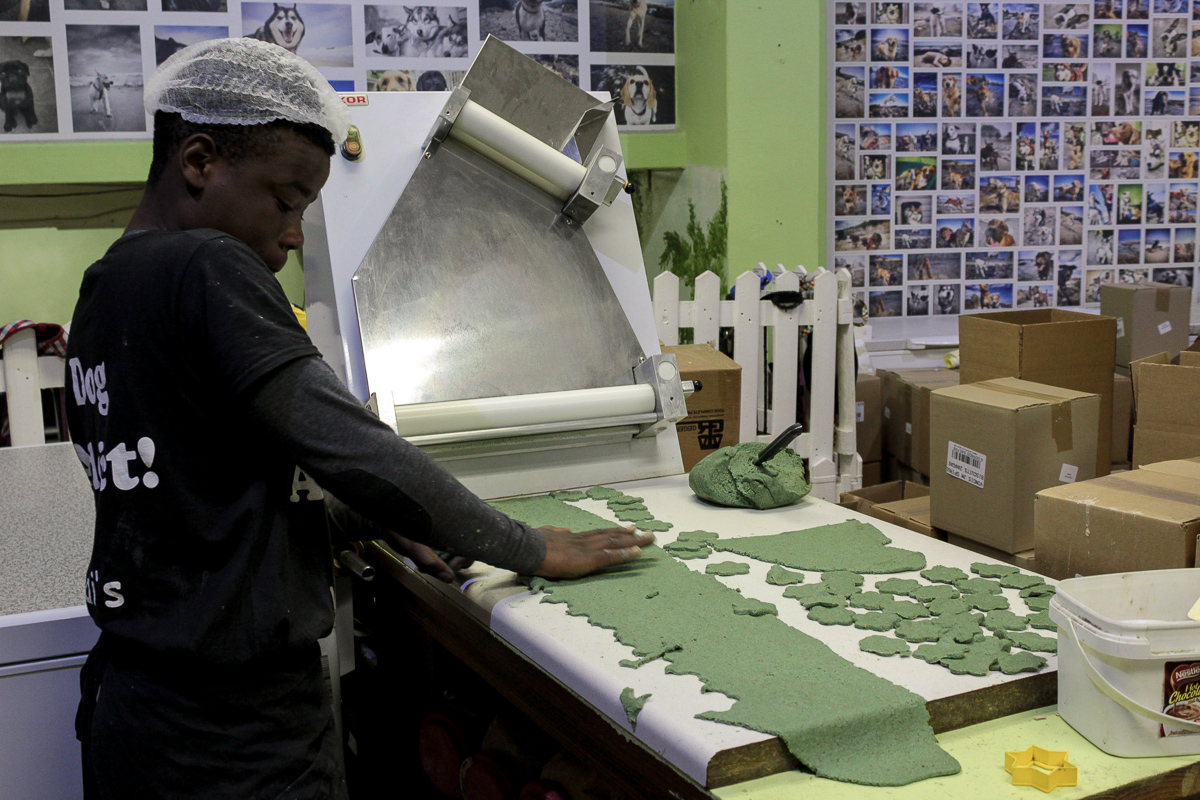 SO, A LOT OF THOUGHT GOES INTO EVERY SINGLE INGREDIENT, BASICALLY?

Oh yes! Nutrition is all about performance and if you aren’t seeing results, something must be lacking in the ingredients.
We make a strong claim in healing skin and other ailments, so we have to be absolutely vigilant. Also, we rely on the palatability of those ingredients. There are so many shortcuts in the pet food industry: you get manufacturers using tomato source with sugar or even digestives.
For us, the nutritional value of our food is more important than the taste. Of course, it is tasty, but that’s not our number one priority.

WHEN DID YOU FIRST OPEN THE SEA POINT SHOP?

It must be about 15 years ago. Eleanor ran it for a bit and then we’ve taken over for about 14 years. She actually started in a tiny shop, but then we got the opportunity to move over to the larger premises. We were reluctant at first, but now we’re really grateful. The size was obviously what we needed. It’s even too small now!

DO YOU HAVE ANY SHOP ELSEWHERE?

We have about 200 stockists, but no other shops yet.

WHAT ARE YOUR MOST POPULAR PRODUCTS?

Our main sellers, which represent about 70% of our business, is still food. But that takes a lot of work, explaining to people the nutritional values. So, once you’ve imparted that information and people become enlightened, they understand why.
But, then, the ‘quick fixes’ like biscuits and treats are also very popular, but definitely a smaller part of our business.
I guess, we focus more on aligning ourselves with the human industry, which is huge in South Africa, especially Cape Town, which boasts some of the most amazing nutritionists in the world. We are a step ahead of most countries.

SO, OBVIOUSLY, THE MESSAGE YOU’RE TRYING TO SEND OUT IS THAT THE IMPORTANCE OF GOOD NUTRITION EXTENDS BEYOND THE HUMANS IN YOUR FAMILY?

Yes, it’s just common sense!
I just don’t understand how people can say, “Preservatives are bad, chemicals are bad” and then, without a second thought, apply anti-flea medication to a dog. That stuff is poison! It’s always strange to me when they’re so vigilant with their own homes and bodies, but don’t extend the same courtesy to their companion animals.
If preservatives are bad, they’re bad. For everyone. So, we want to help people understand that there are healthier meal options for their pets as well. 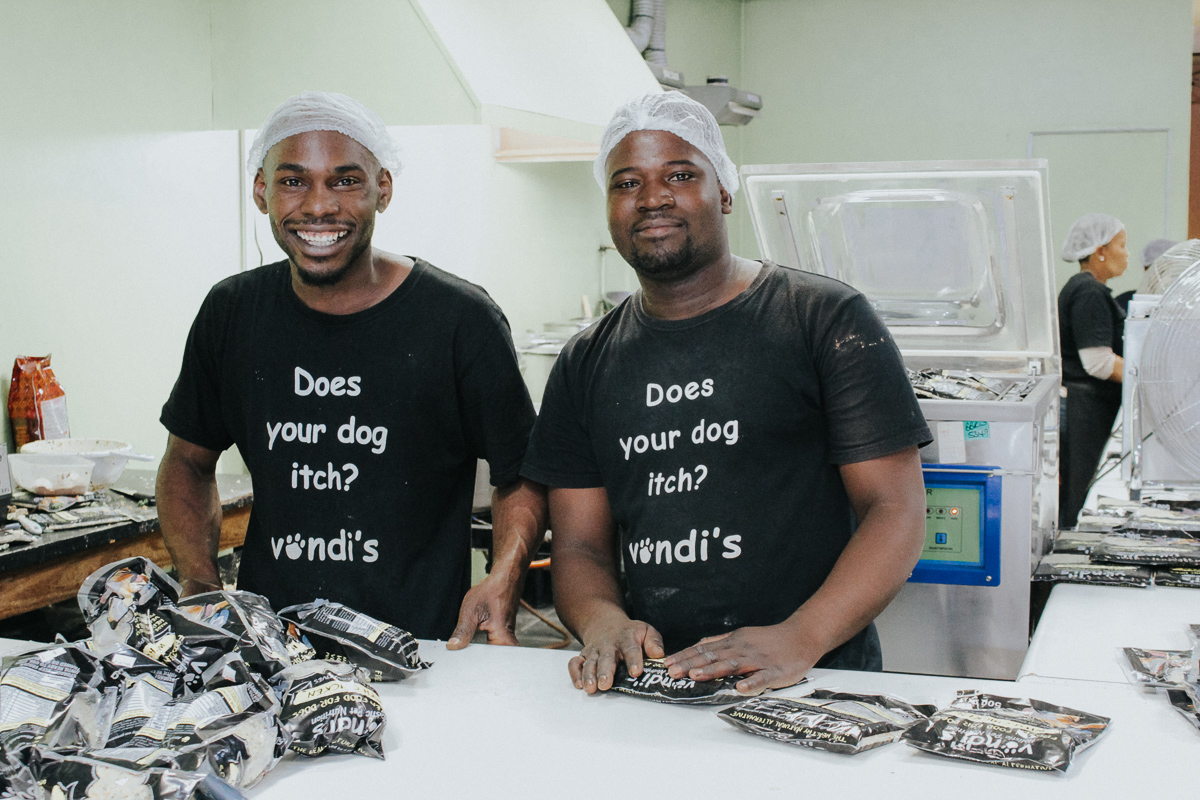 CAN YOU EXPLAIN WHAT PEOPLE SHOULD BE AWARE OF WHEN BUYING COMMERCIAL PET FOOD?

Well, firstly, there are the two types: wet food and dry food.
Wet food is a lot better for your pet, because it typically requires fewer preservatives as canning itself serves to preserve the food to a great extent. It’s also high in moisture, which is a good thing.
What we commonly know as dry commercial food is actually horrendous, because the cooking process it goes through actually ends up destroying a lot of the important nutrients. So, they end up having to supplement further with pharmaceutical vitamins. But, vitamins are best in their natural form.
In other words, dry food is basically just cardboard with a multi-vitamin.
All dry food also has to be preserved to be able to sit on the shelf for 24 months and is pretty much devoid of moisture. That’s how omnivores and carnivores metabolise liquid – through their food. Cats are now drinking copious amounts of water, because they’re dehydrated. All our animals are in a constant state of dehydration. If they eat proper, whole food, they don’t need to drink as much.

DO YOU THINK THERE’S ALSO A SOCAL ASPECT TO SERVING HEALTHIER FOOD TO YOUR PETS – TO INTEGRATE THEM INTO THE FAMILY IN A WAY?

Yes, it’s quite interesting actually. In terms of behaviour, our animals disrespect us now. In the olden days, we used to make food with love and put it down on a plate for them. It was all done with love and you built a bond with your animal.
Now, we just heap a bowl of dry food and put it down without even really looking at our animal. No wonder they’re not always keen to do what we ask them to.

SPEAKING ABOUT BEHAVIOUR, YOU GUYS ALSO RUN A DOGGY DAY CARE AT VONDI’S. WHY IS IT IMPORTANT FOR DOGS TO SOCIALISE IN THIS WAY?

We have about 40 dogs attending our Doggy Day Care and they love it!
Just the same as children, dogs need to interact with humans and other dogs. If you leave a child on their own all the time, they’ll develop all sorts of psychological inadequacies. The same is true with dogs! They need interaction, they need to be entertained. They’re such sociable animals and to leave your doggie at home alone for a whole day is simply cruel.

VONDI’S DO A LOT OF COMMUNITY AND CHARITY WORK. CAN YOU SHARE?

Yes, I feel that we have a responsibility to assist animal welfare as much as possible. We’re very proud of the fact that we support a number of shelters and clinics and also offer a variety of ways in which clients can do the same. One of the fun things we did earlier this year was the Paws on the Promenade doggy walk with Mdzananda Animal Clinic in Khayelitsha to raise funds for them. We had about 500 dogs and humans walking. We’re also very involved with DARG in Hout Bay, when there was the fire, we raised R40 000 worth of food. On our website, we have an option of buying food for your preferred animal welfare. We supported the SPCA going up to Mount Kilimanjaro – we’ve even got a Vondi’s flag flying on the summit!

FINALLY, YOU ALSO HAVE REGULAR RADIO SLOTS WHERE YOU TALK ABOUT PET HEALTH AND WELLNESS. WHERE CAN PEOPLE TUNE IN?

Every Saturday morning – sometime between 09:15 and 10:15 – I have my own show on Smile FM. It’s called Pet Pals and we cover everything on there – from the godliness of our dogs to remedies for ailments, the beauty of our animals, questions-and-answers.
From time to time, I also talk on Voice of the Cape.
Then, apart from that, we’re also quite big on social media and I write a lot of blog posts, which can be found on our site. 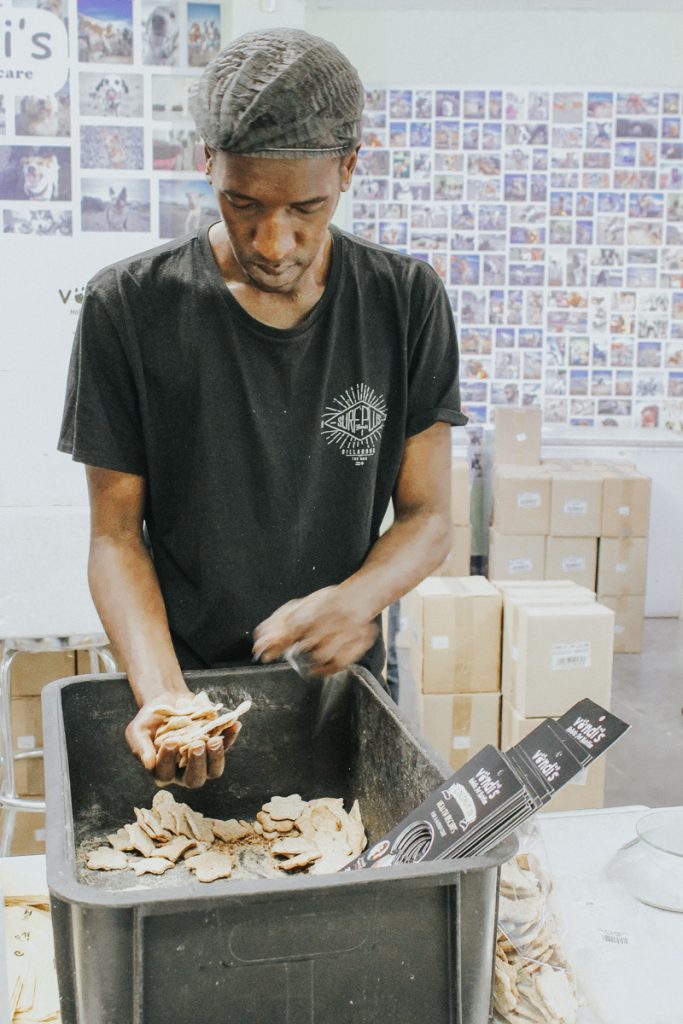