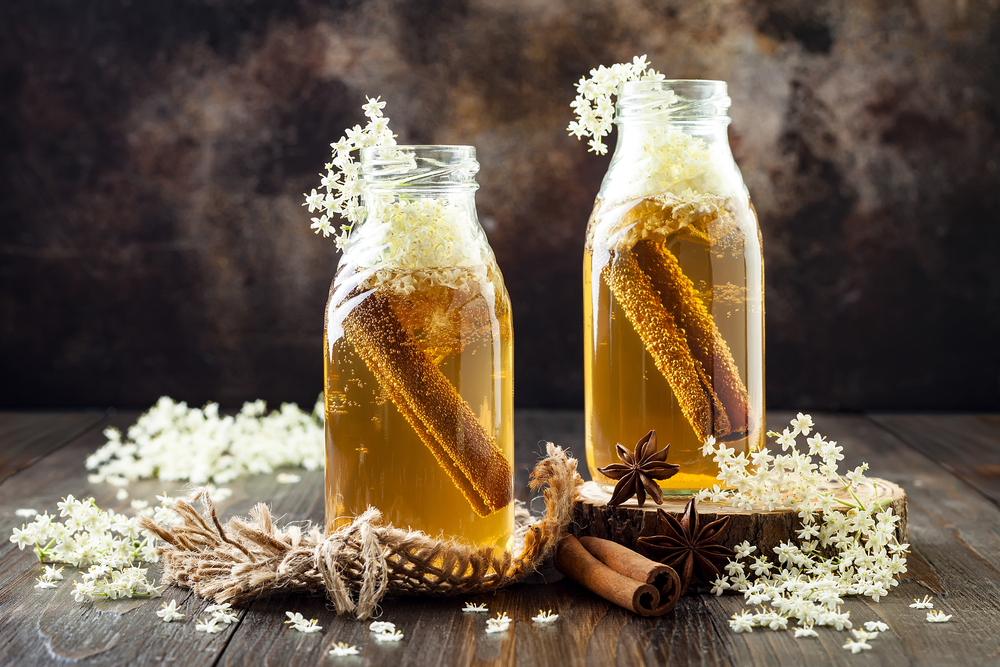 It’s not just the pleasant bubbly tickle that is making Kombucha the drink of choice for those who appreciate some zippy fizz but would rather avoid the sugary temptation of soft drinks. Apart from its appealing taste, Kombucha is an ancient health drink that has benefits for your health too.

WHAT EXACTLY IS KOMBUCHA?

Kombucha is alive. It brims and fizzes gently as it brews, with living enzymes and probiotics. The traditional form of kombucha is made using a tea base – black tea, green, tea, white tea – they all in themselves have powerful antioxidant properties too. Kombucha can also be made by adding more exotic things to the tea, such as fruit juices or even coffee, for some refreshingly tasty variations. Next, sugar is mixed into the tea – but don’t panic, the end result is not as sugary as you may suspect.

The magic part that turns the tea into a yummy elixir is created by a thing with the endearing name of a SCOBY – this stands for Symbiotic Culture of Bacteria and Yeasts. The SCOBY is added to the tea and feeds off the sugar. That’s where the sugar goes – by the time the SCOBY has done its thing there is very little of the sugar left. The SCOBY looks like a white rubbery pancake that sits on top of the Kombucha, or may drift down and float in the tea.

WHERE DOES IT COME FROM?

This drink is so ancient its exact origins are hazy, but it’s thought to come from the Far East and the first recorded mention of its use is found in the Tsing Dynasty 221 BC. It was known as the Tea of Immortality, now that’s enough to get one’s interest going! There is a story of a Korean physician called Kombu successfully using it to treat an emperor and hence the name Kombu added to cha which means tea.

Its use spread to various European countries over the centuries and it came to more mainstream attention again when Dr Rudolph Skelnar from Germany used it to treat cancer patients, metabolic disorders, high blood pressure and diabetes, just after the war. These days Kombucha is gaining renewed respect as we realise just how far from our traditional culinary wisdom we have strayed, and the negative effect that has had on our wellbeing.

Because it is alive with cultures and bacteria, Kombucha has a natural fizz, as opposed to the artificially created version of carbonated soft drinks. The fizz is soft and effervescent and the taste can vary from a cider to champagne-like flavour, depending on what is used to make it. It has a very slight, pleasant sweetness, as a remnent from the digested sugar. As Kombucha has gained in popularity, new and delicious variations have been explored and enjoyed.

WHAT’S HEALTHY ABOUT IT?

As the SCOBY digests the sugar, it gives off all sorts of by-products that are amazing for your health such as organic acids that are powerful detoxifiers, enzymes, amino acids, vitamins, minerals, and probiotics that keep you tummy flora healthy and in balance. As you well know, a healthy gut is central to your good health.

• Protect you against stress
• Support a healthy liver. Some of the organic acids such as Glucuronic and Malic acids are powerful liver detoxifiers
• Up your energy levels, supporting those with chronic fatigue
• Alleviate allergies
• Improve arthritis
• Ease digestive issues – some of the organic acids break down into caprylic acid which is good for killing off candida overgrowth
• Regulates the acid-alkaline balance in your body with its lactic acid content
• Boost your immune system and support you with auto-immune illness and even HIV
• You can use it externally on your skin as a wash, for healthy radiant skin

These are just a few of the benefits, Kombucha has been called an adaptogen because of its ability to balance endocrine hormones and the immune system. It’s an overall health tonic, which is the best kind when you are following a healthy lifestyle to heal yourself in a holistic way.

Kombucha is easy to make at home yourself and there are some nifty kits available to get you started, and for those on the fly who want a convenient dose of  ready made, delicious health-in-a-bottle, there is is a growing range of yummy options to choose from. Bottoms up!

Find out more about the difference between Kombucha and Jun.