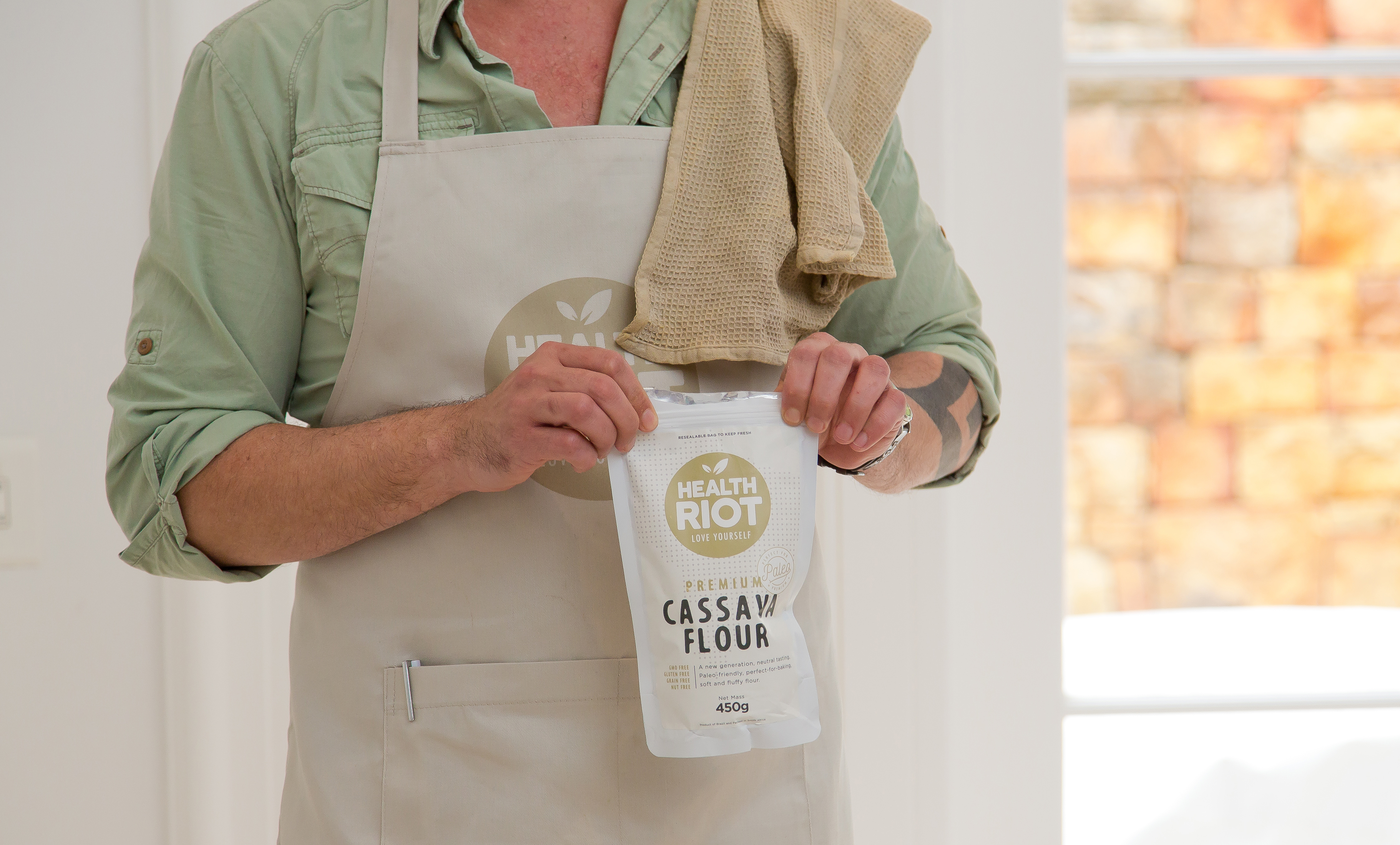 Posted at 06:27h in Faithful to Nature by Andrea Fedder 8 Comments
0 Likes

Those in the gluten-free know will be beyond excited about the arrival of cassava flour to our shores. But for those of you new to the hype, I’ve pulled together some tips on how best to cook and bake with this flour as a new edition to your healthy pantry. I recently attended the Health Riot Launch of cassava flour and was fortunate enough to chat to both Christiaan and Valeska, champions behind the Health Riot brand, as well as chef Jason Whitehead and nutritionist Sally-Ann Creed, also co-authors to the recently launched Tasty Waste-Nots cookbook. I hope this article inspires you to invite cassava into your home and see its benefits for yourself.

As a new arrival to the gluten free cooking scene, I will happily admit to some scepticism to alternative flour substitutes. I’ve tried several types of flours but my favourite recipes like banana bread and Sunday pancakes just don’t quite compare to when I use Eureka Stone Ground flours. Still, I was intrigued.

The event was well attended with industry health food advocates, distributors and nutritionists alike with the added joy of having celebrity chef Jason Whitehead doing some cooking demonstrations of delicious chocolate brownies as well as his recipe for pizza with the incredibly versatile cassava four.

So that you too can feel like you’ve just been to the cooking demo, here are some of the interesting topics discussed and elaborated on from the expert views and experience of Jason, Sally-Ann and Valeska.

1. What was the tipping point decision that made you decide to import cassava flour?

Our pure desire to have it in our kitchen pantry with ease and availability to us on a daily basis.

2. What benefits have you seen in your personal lifestyle and health and perhaps your children that make it so exciting for you to be distributing this product?

Being 100% grain and gluten-free, we do not experience any of that “brain fog” and sluggishness we previously had with wheat. We all have more energy and mental alertness. I can especially see the difference in the children as I think children display the highs and lows connected to food intake more readily.

3. Why should people opt for cassava flour over other gluten-free substitutes? (Christiaan – you mentioned the flavour at the event – can you elaborate on that?)

It does not have as strong a flavour as most other gluten-free flours. Cassava is also the most neutral and “wheat tasting” flour out there. The texture very closely mimics wheat flour and I think that is what people are after when they go gluten free. Often times, gluten-free recipes don’t match up to the taste of their wheat counterparts. With Health Riot’s cassava, you are getting all of the texture and flavour without sacrificing on your health.

4. Best cooking and baking tip for cassava flour?
With baking, it does need a little help with Xanthum gum or Arrowroot powder as with all gluten free baking. This helps with the elasticity.

What Jason Whitehead has to say about cooking with cassava flour?

1. What is your most overwhelming perception of cooking with this flour?

That the recipe would not work, as with any baking really. But with a little experimentation, gluten free baking has never felt so good and guilt free.

2. How does one best go about incorporating or amending recipes? What do people need to know about baking powders, raising agents and strengtheners etc.

For most recipes, cassava flour has a 1 to 1 replacement ratio. It becomes a bit more tricky when doing breads, obviously due to the lack of gluten. I have found, however, that for each cup of cassava flour, if you add 1 tsp of xantham gum, it gives your dough the elasticity that it needs. Some recipes will need more elasticity, to which I then found that adding arrowroot works really well.

Use it with total abandon, and then some. Play with your recipes and find the joy that many others have that do a gluten free and nut free diet.

4. What do I have to do to get that pizza base recipe? And any word on where we might be seeing it soon?
Haha, that is a trade secret I am afraid. I am so proud of my pizza base recipe, as there is nothing like it out there that is gluten-free and tastes and feels so similar to “regular” pizza bases.

What Sally-Ann Creed has to say about cassava flour

1. What is your perception of cassava compared to other gluten free flours available on the market from a nutrition perspective?

I do think it’s a healthier alternative to 99% of the gluten-free stuff out there, NO question!

2. Would you say incorporating this is a massive lifestyle change? If not – why not? If yes, advice?

Clearly, it’s not a massive lifestyle change, it is an expensive one, though, but if it’s healthier in terms of the quality of the product, then it is superior to the starches used to create gluten-free flours.

Used as is, I think it’s divine.  So long as it’s not eaten daily in vast amounts – the way my husband did the other day when I arrived home with the packet.  He made a pile of pancakes up to the ceiling, put honey and cinnamon on, and got himself into a really high-carb night-comatose state…. Oh my word, was he HAPPY!  So yes, the taste is divine, and I’m blown away by the applications.

So, while I personally don’t suffer from a gluten intolerance, I am happy to report that making pizzas with cassava flour was a hassle free experience (even though Jason is keeping his brilliant recipe top secret) and I will gladly be adding more cassava to my diet, especially now that I know, my favourite pizza nights or spontaneous pancakes can become just that little bit healthier.

Head this way to get your hands on some cassava flour and then try out Jason’s cassava crêpes recipe as well as Valeska’s tasty chocolate brownies.