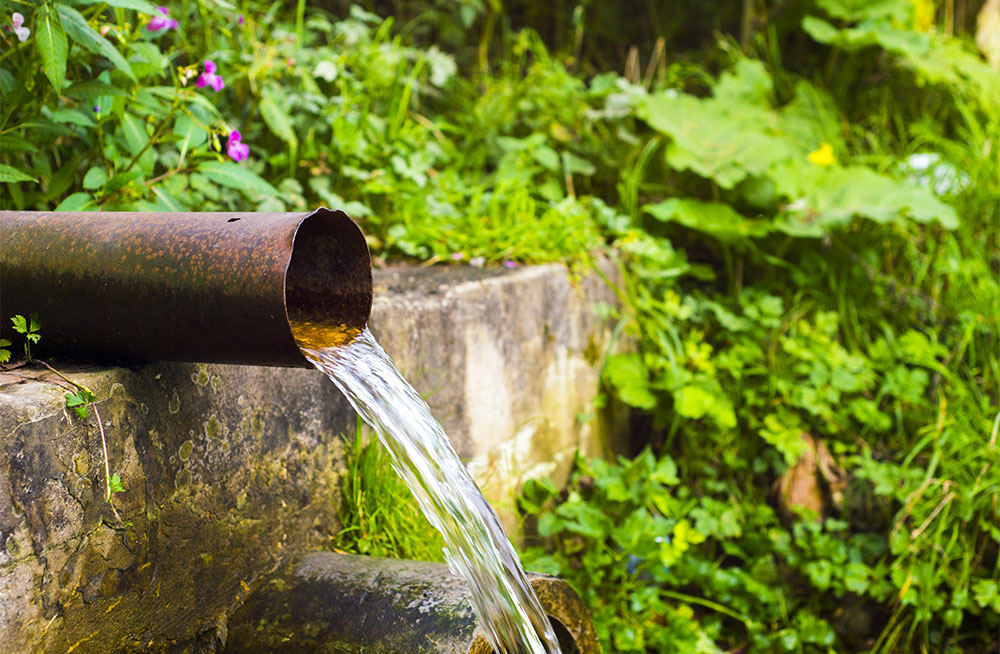 We were sitting at the kitchen table, the newspaper, splayed out in every direction. A story in the Toronto Star reads ‘Crisis in Cape Town: It’s about to run out of water’. I look up at the snowflakes swirling outside – frozen water. “That’s my home,” I hear my own thoughts reaching into the stark reality of what I will be returning to. Day-to-day water conscious living practically doesn’t need to exist in Canada. Rinsing dishes happens as a background event to stimulating and distracted conversations. The water keeps filling the sink, even during the long, awkward pauses – the kind where you turn your back to the running faucet. Did you know the average Canadian uses 360 litres of water per day? Sure, they’re practically living on a melting glacier. I quickly realised how easy it is to take abundance for granted. The truth about circumstances back here at home settled in quickly upon my return. It was 100L of water per person when I left. That was only 6 months ago.

So, when is Day Zero actually?

Day Zero is currently earmarked at 11 May 2018*. The reason the date for Day Zero shifts is because water consumption in various allocated sectors is decreased. The most recent shift from April to May is due to a decrease in agricultural water usage. Many Cape Townians have also taken the call to decrease usage seriously, but the city estimates that some 40% are still not adhering to the 50L per person per day.

Head on over to DA Leader Mmusi Maimane’s #DefeatDayZero campaign page for further info on overcoming this deadline date. Here is a great overview of some hard questions surrounding Day Zero. 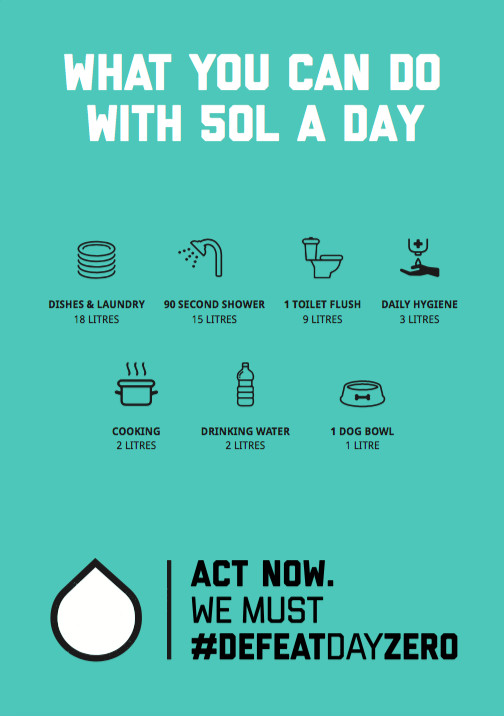 Consider printing out and sticking up this How to Defeat Day Zero Poster at work.

Reality sinks in in strange chunks. Before I left a block of butter cost R39.99. Last week, on a mission to bake my granny’s rusks, I discovered butter now cost just over R60. Rusks have become a luxury in my life. A water crisis affects everything. Absolutely everything. Why? Because every single food item requires water to get from where it’s farmed, harvested, produced – whatever it may be – to you in the supermarket aisle.

So, if you don’t believe your taps are going to run dry – look at your grocery bill. Feels a bit pinchy, doesn’t it? The less water there is, the more expensive food becomes. Best cut that meat out sooner rather than later – if for no other reason than to save our proverbial drought-ridden bacon.

I recently heard a story on the radio about a man hastily filling up his trolley at a Pick ‘n Pay with 5L water bottles. He had packed in all their remaining stock. An elderly lady walked up to him, “Can I at least just have one?” He barked a short, two letter response back at her, “No!”

While an incident like that might seem ‘tame’ it can stir notions that we’re entering an ‘each to their own’ mentality, the reality is, avoiding Day Zero can only be done as a collective. If we don’t take the required responsibility for the remaining resources, that daily allocation will be given to us. And it will be ALL you have. Daily. Get clear on this, folks. It’s not a political conspiracy. Day Zero is a worst-case scenario. It is the beginning of what life without an essential resource looks like. I for one don’t want to see the desperation of human nature tested in a crisis climate of water-fueled crimes.

When it comes down to it, I’d like to believe we’ll show that ‘SA-blood runs thicker than water’. Will we act with foresight to avoid a life where those who can’t afford escalating food prices have no other options?

The DAM truth of it

I took a hike up to De Villiers Dam recently. It’s the higher of the two catchment dams above Constantia Neck. In September 2016 it was so full barely any of the rocks were visible. Currently, that water level is about one meter below the overflow to the second dam. Sure, this one doesn’t supply any major regions, but the truth is always harder to ignore closer to home. 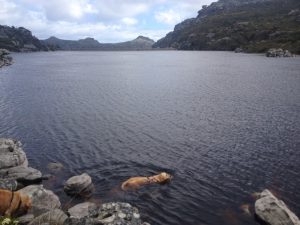 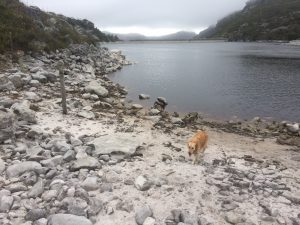 I urge you to take a hike with family and friends to your nearest favourite waterfall or swimming hole and engage with these realities. They will 100% compel you to take action – maybe even in ingenious ways. Have you heard about 60-something-year-old Milly Meltzer who invented Loo Me? Don’t let it be said that South Africans aren’t entrepreneurial, even in the sh******st of times. A boer maak a plan.

For more visual presentation of the drought situation there are countless images and videos online, showing the state of primary dam levels that feed our water supply.

An overview of Streenbras, Theewaterskloof, Voelvlei and Berg River Dam:

A water surplus in the Groenland Water User’s Association will be made available to the city. Some 10 billion litres will be pumped into the Steenbras Dam. However it’s good to maintain perspective: the city of Cape Town’s current daily water allotment is 450 million litres. The quantity being supplied by the Groenland Water User’s Association is enough for 22 days water usage for all of Cape Town. And that’s in our current state of restricted 50L p/p water consumption, not willy-nilly usage. So, while some relief is great news, let’s no rest any laurels on this.

Sometimes I think, the ‘be careful what you wish for’ adage operates in devious ways. As a society, we have gone through a spate of seeking more intentional living. Did we wish for a drought? No. But we sure got a collective call to mindful living arms.

If you can recognize the problem at hand, and accept that blaming the mismanagement won’t get us out of the dwang now, you can get on with this business of making 50L work. Make it damn-well work. The alternative is an even bigger dwang.