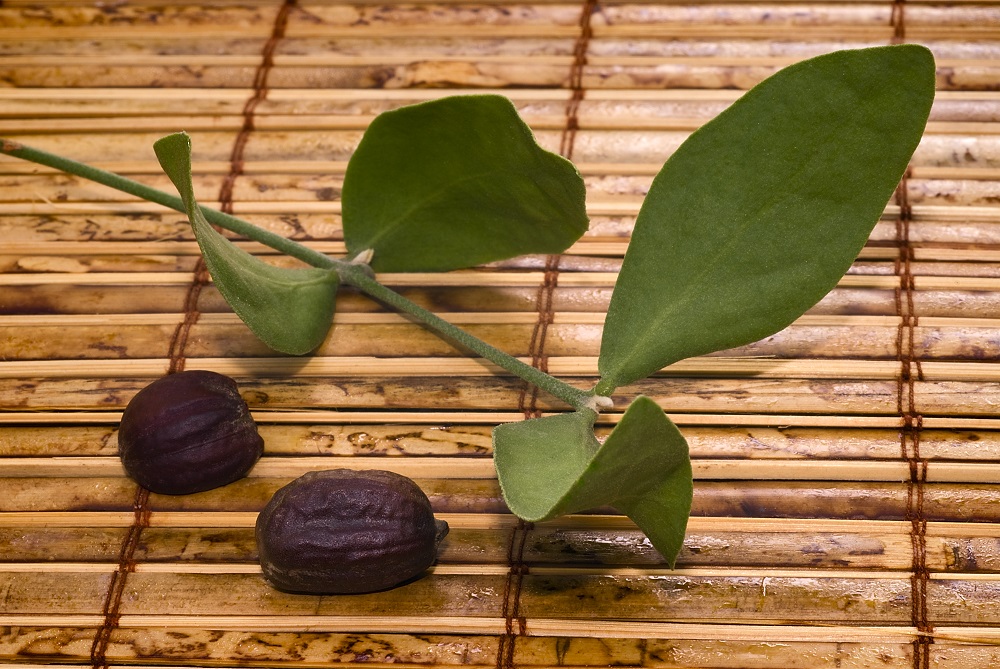 Posted at 15:40h in Recipes by Robyn Smith 0 Comments
0 Likes

Women have been using Jojoba oil as a beauty treatment for decades, if not centuries. Jojoba (Simmodsia Chinensis) is a perennial evergreen Shrub originally found in the desert regions of the southwest United States and north-western Mexico. The seeds of the jojoba plant are crushed using various methods to extract the golden-yellow oil.

The amazing moisturising and healing properties of this unique seed oil have been known through the ages. Early Native Americans used the seeds and their oil for many applications. The meal obtained from grinding its seeds would be applied over open scratches and cuts in order to accelerate healing and reduce scaring. While they also found it useful in medicines for cancer and kidney disorders, the most lasting use has been for treating the skin and hair.Jojoba oil is considered a “natural moisturizing factor” because it astonishingly operates almost the same way human sebum (oil) does. Unlike most plant oils, Jojoba oil is actually composed of liquid wax esters rather than oil. The body’s natural sebum also contains wax esters, which act as a natural moisturiser and environmental barrier for the skin. In this way, chemical composition of jojoba closely resembles that of the skin’s natural sebum, so it is easily absorbed and rarely causes allergic reactions, even in the most sensitive individuals. Unfortunately this natural wax ester production of our skin steadily decreases with age, causing the skin to appear dull and emphasizing wrinkles. By using Jojoba however one has the ability to minimize fine lines and wrinkles, promoting skin suppleness and assisting in the rejuvenation of the skin – NATURALLY!

The Benefits of Jojoba

A reduced wax ester content in the skin can also lead to the development of conditions such as psoriasis, dandruff, dermatitis and rosacea. Jojoba can also help to balance these skin conditions by helping to reinforce the structure of the skin’s outer layer (the epidermis).

But this liquid gold is not just reserved for those who have dry skin! Jojoba oil can actually prevent the skin from becoming too oily. Because the structure of jojoba oil so closely resembles natural sebum, it can actually trick the skin into producing less natural sebum, which can clog pores. It contains myristic acid which also has an anti-inflammatory action and iodine which has an anti-bacterial action. Jojoba oil thus helps to treat acne and prevent breakouts, both by reducing sebum production and by protecting the skin from harmful bacteria.

Jojoba also prevents stretch marks thanks to the elastic effect it provides to the skin. These curative properties make it appropriate for use as an after-sun as well. As Jojoba is so gentle on sensitive skin, it is often used to replace glycerin in baby care, which is derived from petroleum.

Products Made With Jojoba Oil 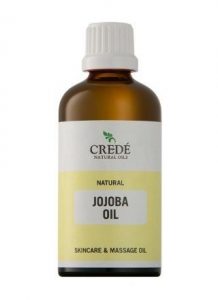 The use of Jojoba oil in hair care products is very common and those who suffer from dry, damaged hair or scaly, flaky scalp will benefit greatly from Jojoba’s ability to deeply penetrate the scalp and hair shaft.

Numerous scalp problems actually originate in the accumulation of sebum, which restricts the proper breathing of the capillary follicles (which are found at the roots of the hair). Jojoba is able to quickly penetrate the scalp, loosening and dissolving the hardened accumulation of sebum. At the same time jojoba is an excellent remover of sticky by-products of modern hair products and of air particles that find their way into our scalp. Many scalp problems occur as a result of such build-up, which can keep the hair follicles from functioning – ultimately killing the follicle – resulting in damaged hair.

With continued use, Jojoba oil ensures that hair stays healthy and clean, with a natural shine. It also offers your hair the hydration it needs in order to facilitate combing. In addition to Jojoba oil’s use as a scalp treatment, many hair conditioners, shampoos and herbal products contain Jojoba oil as its key ingredient.

In fact its popularity and efficacy makes it almost impossible to find a skin care or hair product that doesn’t contain this miracle oil.

Did You Know? Jojoba Oil is used medicinally. It contains vitamins E and B complex. It also has the minerals silicon, chromium, copper and zinc. It has a very high percentage of iodine, almost 81.7%.The iodine concentration gives the Jojoba oil a great power to heal.