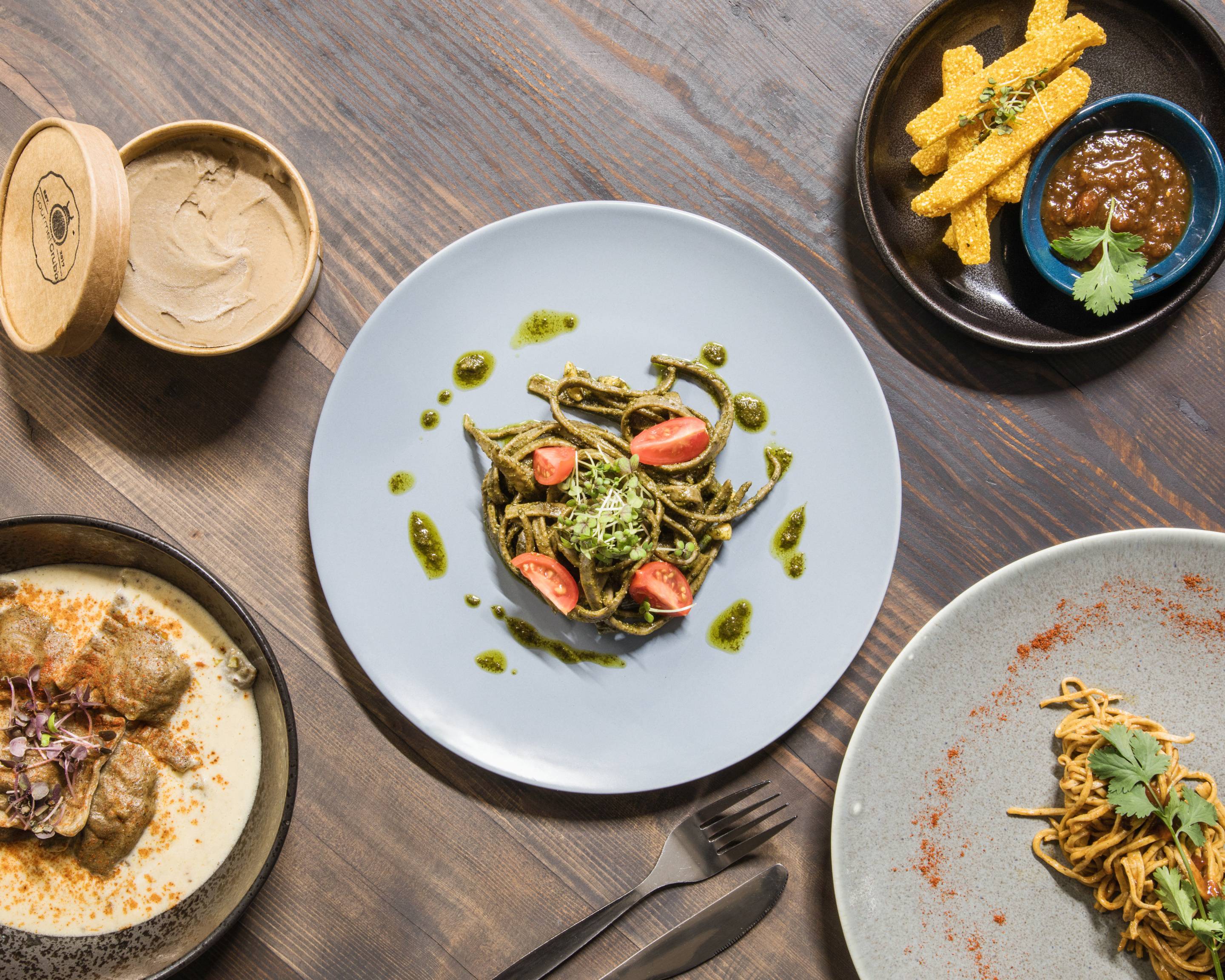 Mario Barnard, the chef at The Insect Experience, brought the platter over to our table. On the wooden board, elegantly plated, was a serving of polenta chips with a homemade smoked tomato chilli chutney, basil pesto and cherry tomato tagliatelle and croquettes with tahini hummus topped with micro coriander. It looked like it could be a meal at any of the fine restaurants in Cape Town. The only difference? Nearly 50% of the food was made from bugs.

As their menu says, ‘Eating insects is a culinary experience, one that delights the taste buds and excites the senses. We want to introduce insects to you in a new and modern way. Forget what you think you know about eating insects…’ But what do you know? Or rather, what should you know? Firstly, it’s not as strange as you might think.

Around 3,000 ethnic groups practice entomophagy, the act of humans eating insects. This equates to roughly two billion insect consumers worldwide spread across 130 countries. So there are a fair few bug munchers out there – around a quarter of the global population. It makes a little more sense when you consider there are around 1,900 edible insects, which are made up mostly of butterflies, moths, beetles, ants, bees, wasps, grasshoppers, crickets, cockroaches, termites, dragonflies and cicadas.

Statistics like these led the United Nations Food and Agricultural Organisation to bring out a report in 2013 called ‘Edible Insects’ that presented evidence of insects’ potential for the planet and human health. Insects were cited as a possible solution to the global food shortage and people took notice. Companies in western nations began producing processed insect flour, burgers, fitness bars, pastas and breads. And the taste? Crickets are nutty, locusts take on a seafood-like flavour and grubs are meaty. There’s mealworm chocolate truffles, caterpillar lasagna and locust souffle. A few leading chefs have also embraced the concept and have developed fancy restaurants and cookbooks to change public perception. But the question on everyone’s lips is; will westerners actually eat them?

COULD THE IDEA FLY?

While there are conventional and psychological barriers to eating insects, the arguments for insect farming are compelling. They can be split into four main points:

Firstly, 70 per cent of the world’s agricultural land is already directly or indirectly dedicated to meat production, with global demand for livestock products expected to double between 2000 and 2050, when our global population will reach 9 billion. Simply put – we need to make a plan. Oceans are overfished, environs are becoming polluted and climate change threatens crop production. As the ‘Edible Insects’ report stated, ‘To meet the food and nutrition challenges of today – there are nearly one billion chronically hungry people worldwide – and tomorrow, what we eat and how we produce it needs to be re-evaluated. Inefficiencies need to be rectified and food waste reduced. We need to find new ways of growing food.’

Secondly, insects are way more efficient across the ecosystem and need much less food, water and space compared to traditional livestock, while emitting fewer greenhouse gases. More than 10 times more plant material is needed to produce one kilogram of meat than one kilogram of insect biomass. It’s a similar story with water. Production of 150g of grasshopper meat requires very little, while cattle requires 3,290 litres of water to produce the same amount of beef. Importantly, they also produce 80 times less methane.

Thirdly, edible insects display much faster growth and breeding cycles than traditional livestock. A female cricket can lay from 1,200 to 1,500 eggs in three to four weeks, while for beef the ratio is four breeding animals for each market animal produced. This gives house crickets a true food conversion efficiency almost 20 times higher than beef.

COULD ANYTHING CLIP THE WING’S CONCEPT?

Despite the advantages of insect farming, there are some challenges the industry will face as it grows. Firstly, mass production is a concern due to the lack of technology and funds to efficiently harvest and produce insects. As it stands, large scale production hasn’t been set up yet and no one is too sure what obstacles could develop. The machinery would have to house proper enclosures for each life cycle of the insects, as well as control the temperature as that’s key for insect development. This will come at a reasonable cost as insects are still somewhat expensive to produce because we haven’t reached economies of scale yet.

The same applies to the environmental impact of the industry. Some believe not enough is known about the environmental impact of insect farming, and that it could be much more complex than initially thought. Scaled-up production will increase the industry’s environmental footprint through the cultivated grain it needs for feed, and preserving the food through processing such as grinding and freeze-drying, which use significant energy. It has been argued that, overall, the realities of rearing insects on different substrates and on a large scale are yet to be fully understood, and may bring with them hidden or unforeseen environmental costs.

Then there’s the question of sustainability. Many edible insects are wild harvested and, in some cases, this can lead to overexploitation. According to a Forbes article, this is a threat feared by Thai villagers in regards to their local silkworms. SOURCE: (www.forbes.com).

Ultimately though, the biggest challenge will most likely come down to taste and the mental block westerners have against sticking creepy crawlies down their throats. According to Kelly Sturek, owner of a US startup called Bugeater, it’s down to one thing. ‘It’s all about taste. In food, you can say whatever you want about marketing. “Hey, it’s good for the environment. It’s good for you.” Really, what it comes down to is taste.’

Back in the day, lobsters were barely eaten due to their strange looks and prisoners were often fed them. At one stage, there was even a petition to stop the inhumane practice of prisoners eating too many lobsters. Today, it’s the most expensive meal at any fish restaurant. And what is a lobster, if not a giant cricket? If they can change their image, maybe insects can too?

The polenta had a smoky taste, the tagliatelle had a similar feel to rye and the croquettes tasted … earthy. There was ice cream too and even treats called bugaroons. It was all pretty satisfying and the whole concept really was kind of bewildering. By grinding the insects into powder their versatility knows almost no bounds. But I know, from talking to people and reading online comments, the stigma of eating insects will be tricky to overcome in western societies even if they’ve been a part of some human diets for millennia.

Maybe the first step is not to try and change eating habits, but instead to educate the public and investors enough so that the industry can receive some serious funding. And there’s a decent monetary incentive too; it’s been forecasted that by 2023 the insect food market will be worth $1.2 billion, but if perceptions change it could be worth much more. Let’s hope sense, as well as cents, prevails. And me? Well, after much consideration, I realised that if it’s good enough for Timon and Pumba, then it’s good enough for me.

Food Trends to Sink Your Teeth Into