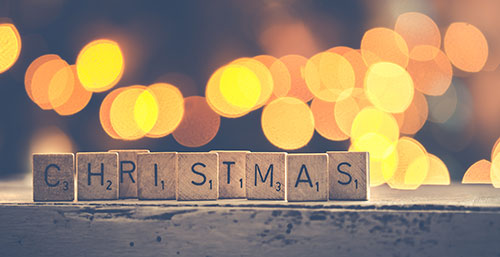 19 Dec Reconnecting with the true spirit of Christmas

Posted at 22:05h in Faithful to Nature by Andrea Fedder 0 Comments
0 Likes

The silken, green stitching quickly caught my eye. A tiny row of houses under fir trees rimmed the edge of the hand towel in the guest bathroom. The trees embossed into the plush, white of the towel reminded me of bird footprints stamped into the freshly fallen snow. Beside the tap stood a slender, elven-like tea light holder, small acorns circling its edge. And below the fresh conifer fronds in a glass vase – a little binder of wintery illustrations and thoughtful prose to turn the mind inward.

Her attention to detail was everywhere. This was the handiwork of my aunt, bringing out these same simple additions each year. In every room, Christmas chimed. Besides celebrating with family (and here in the snow at that!), it was this, her hallmark of re-instilling tradition quietly in the background, that mirrored my own fondness for this time of year.

But with all that opportunity to capture the magic of such a special time of year, retailers have swooped in like swarming magpies, offering a bewildering array of things you need in order to have a magical Christmas. Intuitively, I push back against the commercial miasma. While the little touches certainly lend to the richness, they’re not the backbone of what gives this time of year its heart. It wasn’t the things in the guest bathroom that made the holiday season special — it was her ritual of transforming the rooms, just like the turning of autumn had an inevitability all of its own.

If that’s the case though, how do you cultivate the atmosphere of a beautiful festive season? What does it take to capture such ephemeral magic?

Certain that this resonance didn’t sit with me alone, I reached for my phone lying on the carpet near me. “Hey, I’m working on an article around capturing the atmosphere of Christmas and I need to get outside my own head and perspective to gather some input. Here’s my question: What are your 3 favourite things about Christmas?” It seemed odd at first to be using my circle of friends and connections as a resource for gathering data. And yet, in an age when it often feels like the internet offers you more of the same, turning instead to the people that mattered to me, especially around a topic so people-centric, felt like a sampling of unfiltered honesty.

While I waited for their responses, I continued with my own Christmas planning. Baking favourite German recipes has always been a big part of my family’s traditions growing up. Compiling the list of biscuits that would make it into the oven this year brought me immense joy. I gravitated towards baking the biscuits the people I was spending the holiday with enjoyed most, thinking of how their eyes would shine when that freshly baked plate appeared on the coffee table. For my uncle, spicy Pfeffernüsse was a given. I could already hear his deep consonant-riddled guffaws at the sight of their freshly iced forms. To awaken a childlike glint in the eye of a 62-year old man with a beard more silver than snow crystals in the northern sun is the type of privilege I look forward to every year. And for the guests who would be milling around later that week with homemade glühwein in hand, a cheerful, iced gingerbread man to take home as a party favour felt like a more simple, sentiment-filled gesture.

This season offered so much heartwarming opportunity in the many ways you could enrich the experience for others — to create an environment that drew people out of themselves into a collective space of intrigue and magic. Pine-scented wreaths hanging from archways, cinnamon and cedarwood infusing the room from a hidden oil burner tucked in the corner — the silent cast and choir of Christmas. Perhaps the most charming gift for the host is to watch a room full of their loved ones, melting into the conversation, immersing themselves in all the nourishing sensory stimulation around them.

Just then, my phone sprung into commotion as the responses pinged through one by one. I poured over each answer and personal story like the satin black squirrel outside savoured his ration of nuts, turning and polishing them one by one. My heart beamed at the similarities and overlaps.

Their messages all spoke of deeper unions and the fulfilment of connecting to that sense of belonging we all yearn to feel.
For those of us with the opportunity to live largely global lives, an event like Christmas spurs us on to follow the threads back home, a place we can softly land. To even have that opportunity at this time of year, is a privilege not everyone can look forward to.

Virtually all of my friends mentioned how they enjoyed the lightness at this time of year, that people are more appreciative, that their energies are happier. Like many hands billowing out a large quilt, I wondered whether we didn’t underestimate our own power of collectively lifting the universal spirit. Perhaps we were drawn to the effortlessness of it at this time of year?

Their messages echoed the rarity of the occasion, and in particular, enjoying a feast together. But it wasn’t just the eating together — it was the intention of a dedicated time and space to sit together. Sharing the meals unique to their gatherings held the key to why the food was so eagerly anticipated. It was about the recipes, embedded in their family ties — that’s what made them so personal. A meal they look forward to but also relied on, like a safety net — red cabbage with applesauce, mince pies made with a sister, cinnamon-laden Portuguese pudding. It was all there in the stories.

And for me, this was the final layer to why this time of year carried such significance. Their stories. The wonderfully peculiar details of their stories. The telling of stories summed up so much of what I loved about Christmas.

It’s ingrained who we are as a species — having derived warmth and belonging from tales told around the fire, passing on the details that connect us.

As for capturing the true atmosphere of Christmas? Live the details of your traditions to their fullest. Stoke them with stories and memories. Keep them alive by recreating that magic for others. Then stow them away like the black squirrel in the woods buries his chestnuts only to bring out those very same traditions next year, like Carina’s plush white towels with glossy, green stitchings of houses and fir trees.