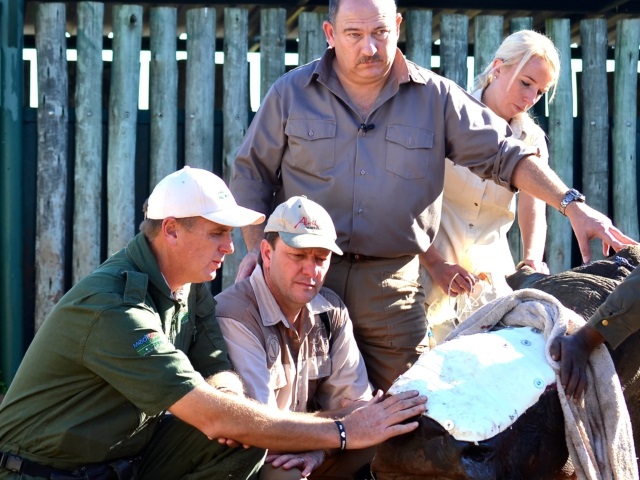 Posted at 09:53h in Faithful to Nature, Wasteless Life by Chevaun Roux 0 Comments

Last year Faithful to Nature decided to put the soul back into shopping by utilising expenditure on Black Friday to give back to a cause. And so came in Saving the Survivors. This incredible organisation is founded on the basis of aiding and assisting all animals who fall prey to poaching. Although the organisation is aimed at all wildlife, rhinos have become their largest focus, purely because these beautiful and powerful creatures have become the victims of so many poaching crimes. And unless you’ve been living under a rock for the last few years, this is not the first time you are hearing about poaching in Africa.

Saving the Survivors was founded in 2012 by Dr Johan Marais who attended to endangered wildlife who were the victims of poaching and attacks, as a response to the horrific increase in poaching incidents. Dr Marais states alarmingly that “If the rate of attacks were to continue as they are right now we could see the extinction of the rhino in the next seven to eight years. In our life time, under our watch.”

One of the veterinarians, Dr Zoe Glyphis, at Saving the Survivors gave us an update since our donation in 2017:
“The incredible donation that we received from Faithful to Nature went towards the treatment of Bahati (Or ‘Lucky’ as she was fondly called by the locals). Bahati is a White Rhino heifer who was poached sometime last year for her horn. She lives between Mozambique and the Kruger National Park, and we were contacted by the veterinarian on the Mozambique side to come out to assess her and treat her. So, we visited her and treated her in November last year, and she has been seen a few times since and all her wounds have healed beautifully… and she has been seen with a bull. We are hoping there will soon be some more little Bahati’s running around!

And what is even more encouraging and a great turn of events is that after our meeting with the Mozambican veterinarian, Dr Joao Almeida, he has since joined Saving the Survivors as one of our official team of vets. Now we have a mobile veterinary unit in Mozambique to care for more rhino just like Bahati!

Currently we are treating two rhino Survivors, Seha and Thembi, both poached for their horns, and we are still called out almost weekly for new cases of rhino that have been shot and injured. The situation is incredibly sad but at least we can still try to help them and support the people on the ground trying to take care of them. You can follow our journeys on Facebook.”

For more information about Saving the Survivors and to see how you can help them on their incredible quest you can go www.savingthesurvivors.org.