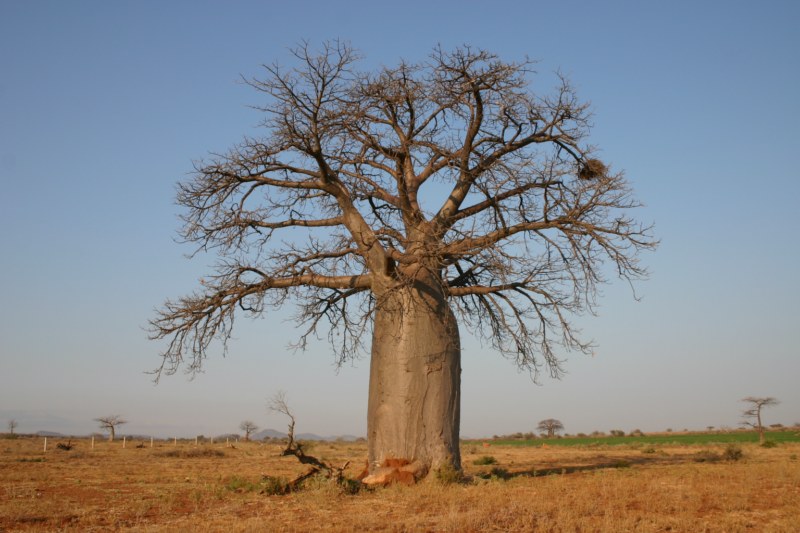 22 Jan The Magic of Baobab: Superpowers of a Superfruit (by Nina Geraghty)

Its beautiful extravagant flowers blossom dramatically for just 24 hours and then wilt, yet the Baobab tree can thrive in harsh desert-like conditions for well over a thousand years.  And although it’s very difficult to kill a fully grown tree, it is said that when Baobabs die, they rot from the inside and suddenly disintegrate, leaving just a heap of dust and fibres. So it’s not hard to believe that they don’t die at all, but simply vanish overnight. No wonder the Baobab tree has such a legendary aura of mystery and magic about it.

But the true wonder of the Baobab tree lies in its fruit.  It can take a Baobab tree up to 200 years before it produces its first hard green-brown velvety pod-shaped fruit. EcoProducts, a Baobab products company based in the Limpopo, only harvest the fruit once it’s fallen to the ground ensuring the trees are not damaged in any way during the harvesting process.

The fruit pods are broken open to reveal small hard dark seeds embedded in clumps of a pale apricot-tinted dry fibrous powder. The seeds are separated from the powder, and cold-pressed to produce the rich oil prized by cosmetic companies for its skin-nourishing qualities. Because the powder is already dried inside the pod, no further drying or processing is required so it retains all of its extraordinary nutritional qualities. The powder is then finely sieved and once packaged into convenient tubs, finds its way onto retail shelves as Baobab Superfruit Powder.

Baobab: Superpowers of a Superfruit

Vitamin C is an essential nutrient and antioxidant found in abundance in Baobab fruit powder.  Baobab Powder has nearly 4 times more Vitamin C than oranges, and has one of the highest antioxidant ratings.  Because Vitamin C can’t be stored in our bodies it’s necessary to consume it on a daily basis.  Vitamin C is helpful in absorbing iron, which Baobab powder also has in greater quantities per gram than red meat, lentils and tofu.

Calcium is an alkaline mineral and functions to support bone and dental health, muscle movement and vital metabolic functions in the blood, nerves and cells. Baobab Superfruit Powder is an excellent source of calcium for children, vegans, pregnant and post-menopausal women and is possibly the richest plant-based source of calcium known, containing 1.5 times the amount of calcium found in almonds.

We know that dietary fibre is vital to maintain a healthy digestive tract. Baobab powder contains over 50% total dietary fibre by weight – higher than other fruits including pears, oranges, apples, peaches. Even more significantly, the majority of the fibre (up to 75%) in Baobab powder is of the highly beneficial soluble kind. Soluble fibre which can be dissolved in water, regulates blood sugar by slowing down the transit time of foods in the digestive system and thus the release of sugars.  The insoluble fibre in Baobab powder, although it can’t be digested, is nevertheless just as necessary as it helps other food move through the digestive tract.

The soluble fibres in Baobab Powder have been found to have a prebiotic effect (promoting healthy probiotic bacteria in the gut).

Baobab powder can easily be consumed on a daily basis and two tablespoons will yield approximately:

The taste of Baobab powder is reminiscent of a tart sherbet-y apple-lime flavour adding a zesty freshness to drinks, smoothies, breakfast cereals, desserts and much more.

Quite apart from the health benefits, baobab fruits contain yet another gift: the small dark seeds. These are cold-pressed to release a rich golden-amber oil which provides impressive moisturising qualities to both skin and hair.

Because it’s plant-based, baobab oil absorbs easily and quickly, improving skin elasticity, encouraging regeneration of cells and does not clog pores. It is a superb moisturiser excellent for treating extremely dry skin conditions, and can also be used to condition dry and brittle hair.

With qualities as remarkable as these, it’s not difficult to see why the Boabab tree is often referred to by locals as the “Tree of life”.

EcoProduct’s Baobab Superfruit Powder and Baobab Oil are both certified organic.  EcoProducts has implemented a research and monitoring program gathering information about the state of baobab populations in the harvesting area.  A nursery is being established to grow and actively plant baobab trees to boost the natural population and sustainability.  In this way, the company plays an important role in the conservation of baobab trees.  Baobab fruit is sourced directly from communities who live in the poorest and most underdeveloped parts of southern Africa and Venda bringing about much needed economic benefits. Visit www.ecoproducts.co.za for recipes and a wealth of fascinating information on all things Baobab.

Written by Nina Geraghty on behalf of EcoProducts