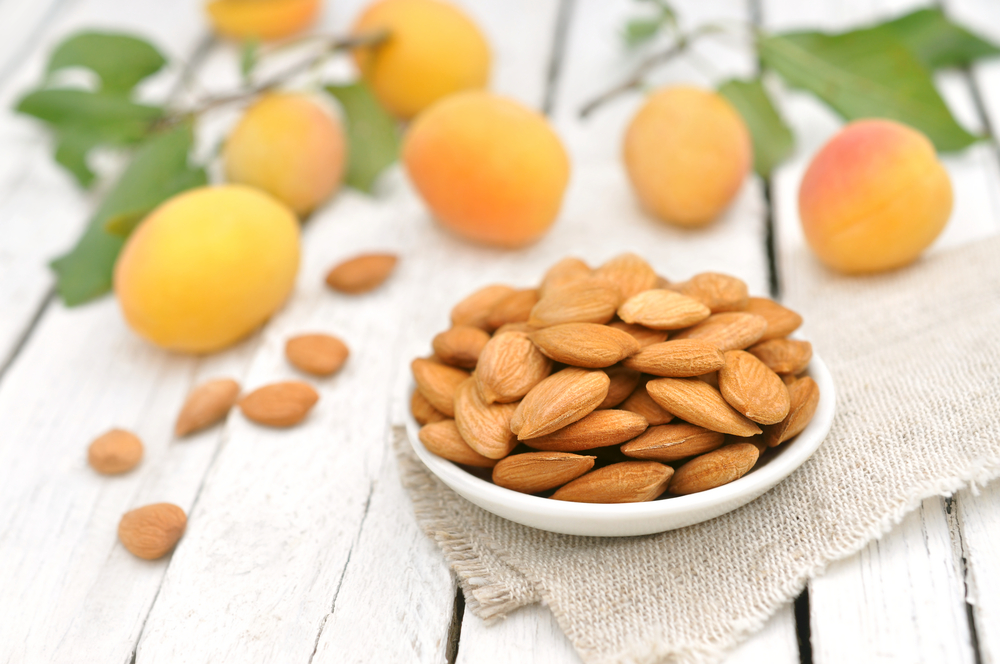 12 May The Bitter-Sweet Question: Are Apricot Kernels Safe to Eat?

Posted at 09:38h in Faithful to Nature by Renee Louw 9 Comments
1 Like

Apricot kernels are where we get the extract for that distinctively delicious flavouring for marzipan and amaretto liqueur and have long been used as a nutrient-packed superfood. There’s been a recent stir about this flavoursome little pip though. That taste some of us love so much is actually the result of a compound called amygdalin, also known as vitamin B17, and that has got people talking. We take a look at what all the fuss is about.

Apricot kernels have become quite popular these days as they are considered a great health food – full of healthy fats, fibre and iron. They’re also thought to contain anti-cancer properties according to some, and it has become quite popular to whizz these up in smoothies, add a dash of ground pips to jams (as was traditionally done centuries ago) or use them in pesto’s much as you would nuts such as almonds, cashews or pine nuts.

Apricot kernels have been a main food source in certain cultures such as the Navajo Indians, the Himalayan Hunzas and the Abkhasians of the Black Sea region for centuries. In fact, studies have been done on the Abkhasians due to their extreme longevity.

These kernels are also found in many Chinese homes where it is added to soups and teas. In Chinese pharmacology, the pits are classified as a drug and they’re used medicinally to combat cancer, stimulate respiration, improve digestion, help reduce blood pressure and arthritic pain and give a sense of well-being.

That marzipan flavour from amygdalin is found in other fruit seeds too such as apples, plums, and peaches.

Apparently it an evolutionary adaption these fruits developed so that when the fruit is eaten, the pip would be left intact. It’s an ingenious molecule that breaks down into 4 compounds, benzaldehyde, hydrogen cyanide and two molecules of glucose. Benzaldehyde is the part with that specific flavour. You may have noticed that one of these compounds is cyanide though – and here we have the root of the Apricot Kernel Question.

Most of the time when we eat fruit such as apricots and plums we never give it a second thought that there may be cyanide lurking somewhere near our taste buds, as the pips are too hard to chew and we usually discard them. For those animals that may give these pips a chew, the resulting light headedness caused by the cyanide would act as a deterrent to them eating too many more.

It is the presence of cyanide in these kernels that has got The European Food Safety Authority (Efsa) concerned. There have been a few incidence of people (often an unspecified amount) eating apricot kernels, being admitted to hospital with cyanide poisoning, and there have been a number of people who report feeling the symptoms of cyanide poisoning – vomiting, fever, headaches, insomnia, thirst, lethargy, nervousness, and joint and muscle pains –  after ingesting apricot kernels.

The Efsa has warned that the amount of cyanide in a small kernel would be toxic to a toddler and that just three small, or one large, apricot kernel in a single serving could put an adult over safe levels of cyanide. They have also found that even low doses can cause symptoms of poisoning, and as little as 0.5mg to 3.5mg per kilogram of body weight can be lethal. They recommend that no more than 20mg per kilogram of body weight should be consumed at once, which would amount to one raw kernel.  That means that for young children, half a kernel would be over the limit. They are currently in discussions with the European commission on whether action needs to be taken, which could include removing the products from sale in the EU or providing health warnings on packaging.

The American Herbal Products Association has given apricot seed a class 3 rating so that they have to be labelled with a warning that says they need to be used under the supervision of an expert qualified in its appropriate use and that it is not recommended for use by children.

Do Our Bodies Adapt?

In fact, our bodies (amazing laboratories that they are) can naturally convert cyanide into compounds called Thiocyanates using an enzyme called rhodanese. These compounds are less toxic to our bodies than cyanide,and can be excreted in our urine. Sickle cell anaemia is a thiocyanate deficiency disease, which seems to indicate that we need Thiocyanates.  Does this mean that our bodies have evolved to cope with, or perhaps even need cyanide in our diets? Or that as we eat these types of foods our bodies adapt to them?

Apart from the idea that our bodies may adapt, the other consideration with apricot kernels is that you get kernels with varying degrees of amygdalin in them – the more amygdalin, the more bitter, so that the sweet kernels may not pose as much as a problem. Sweet apricot seeds are often sold as snacks or for baking, as they contain very little or no amygdalin.

So it also depends on the amygdalin content of the particular seeds you eat. Grinding, soaking, then heating the seeds apparently can also help neutralise the toxin, which may be why the ground powder could be added to jam recipes in the past without repercussions.

The Jury Is Out

There are so many natural substances that could be dangerous, and as with all things, and as anyone with specific allergies knows, different people have different tolerances for the same substance. Natural is also powerful, and needs to be respected. When it comes to amygdalin, if you decide after being informed of the warning that you want to include these seeds in your diet, do it sensibly. Don’t binge on them because they are thought to be healthy; eat only one at first and see how you react. If you find you can tolerate them you can consider building up how many you eat over time, and if you notice any of the side effects mentioned, stop and consult a doctor. If you have kids (or are pregnant), it would be wise not to let them eat Apricot kernels as it seems the cases of poisoning were predominantly children.

The apricot kernel debate appears to be a complex question that needs to take into account the combination of  our body’s ability to adapt, whether it already has a tolerance or could build one up, and the type of kernels you eat (bitter or sweet), that varies from person to person. What has your experience with apricot kernels been? We would love to hear your personal experiences and viewpoint.