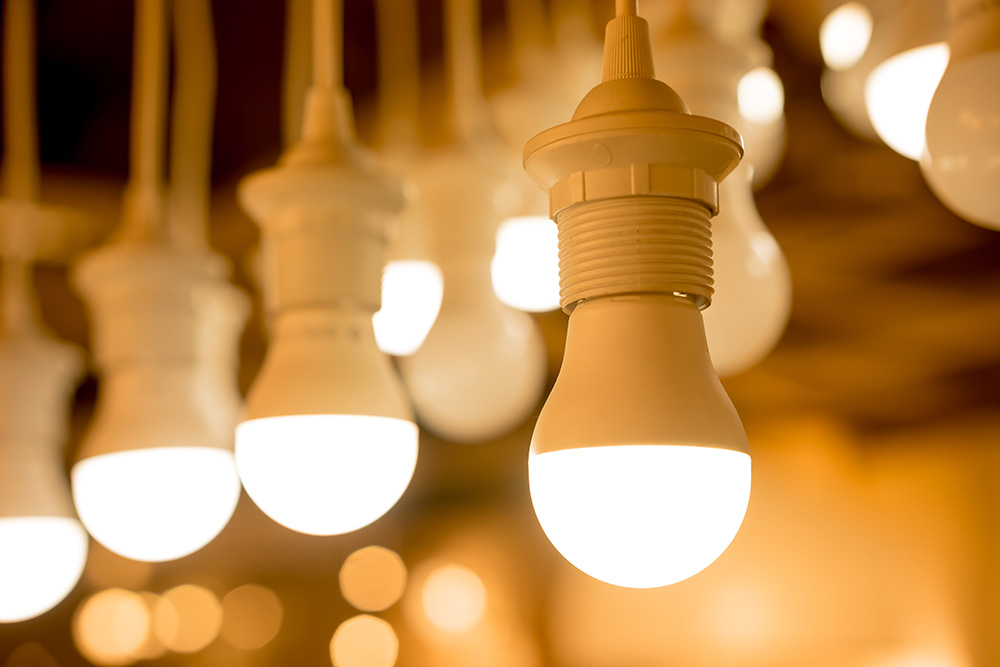 17 May The Benefits of LED Lighting: 6 Reasons to Switch

LED lighting, as we’re sure you’re aware, offers vast energy savings over traditional incandescent bulbs – and that makes them not only much better for the environment both in the long and short term, but also a darn sight cheaper to run. However, fewer people know that LEDs also help keep foods safer, are easier to recycle, and misdirect considerably less light than almost any other type of lamp. Here are our top six reasons for making the switch right now:

1. THE LONGER LIFE OF LED’S

We all know that LED bulbs are significantly longer-lasting than traditional or even CFL energy-saving varieties – but by how much, exactly? Well, by using dramatically less energy than almost any other type of lamp, LED bulbs can typically achieve a lifespan of 50,000hrs. An incandescent light bulb, in contrast, will fail at approximately 1,200hrs – that’s every couple of months if left on all the time (which of course would be unsafe!), or roughly twice a year under an average user load. A halogen lamp will average around 2,500hrs, while a fluorescent can run for something in the region of 12,000hrs. Even a sodium lamp will usually only make it to roughly 20,000hrs. In short, LED options will usually give you more than double the lifespan of their closest competitors in terms of energy efficiency and resulting lifespan.

2. IN LIGHT OF SAFETY

In addition to being longer-lasting and more energy efficient, LED bulbs are far safer in use on multiple levels. They contain no hazardous chemical materials such as mercury (a common component in traditional bulb manufacturing), phosphor or sodium, and LED bulbs also present far less of a burn or fire hazard. This is because their vastly improved energy efficiency means they don’t waste any power on generating heat; in short, they don’t ever warm up, even over very extended periods of ‘on’ time.

A further safety point you may not have considered: the light quality produced by LED bulbs can also significantly inhibit bacterial growth compared to that produced by incandescent, halogen or fluorescent lights. This, along with the energy and cost savings, is why LED lights are so often found in supermarkets and commercial kitchens. They slow down degradation of foods and help preserve nutrients for longer – partly because they help keep ambient temperatures lower, but more importantly because LED light contains no UV (ultraviolet) rays which fuel bacterial growth, unlike both natural light and that produced by traditional bulbs. For similar reasons, UV wavelengths also attract bugs and insects, which ‘warm white’ LEDs (those emitting colour temperatures lower than 3200K) do not.

4. EVEN BETTER, ONCE BROKEN, FOR THE ENVIRONMENT

If and when LED bulbs do eventually wear out or break, they’re also significantly better for the environment than CFL (compact fluorescent light) bulbs in terms of disposal. CFL varieties – the older style of energy-saving bulb that typically comes in a slim glass spiral or helix configuration – still commonly contain mercury, which means that both proper clean-up of breakages and attentive disposal are critical. Every region has slightly different rules in this regard, so you’ll need to contact your local waste management service to find out what the correct protocol for disposing of used CFL bulbs is in your area, but they should never be disposed of in your regular trash or recycling bins.

The vast majority of LED bulbs, meanwhile, can be recycled safely, because many consumer varieties are made predominantly of plastic and contain no harmful chemical elements. This gives you the option to shop for LED products even more discerningly from an environmental perspective, seeking out varieties that are made from natural, recycled or reused materials where available. It also makes them particularly well-suited to a range of outdoor applications, where their chiefly non-metal construction and chemical-free illumination mechanism can combine with solar sensors to create some of the most wildlife-friendly, cost-effective and durable garden lighting options available.

Using LEDs reduces the total amount of lighting needed to achieve the overall brightness you want in a particular space. This is because they are highly directional and focus their light emission along the path you aim them at, unlike traditional incandescent or CFL bulbs which cast light in all directions. While the latter may sound like a more efficient way to light a room, it isn’t – next time you’re standing under a non-LED bulb, check out the inevitable bounce pattern on the ceiling above you: that’s all basically wasted energy, throwing a percentage of the bulb’s output into largely useless areas. 100% of an LED ceiling bulb’s output is focused downward into the room it’s supposed to be lighting, which is why they’re beginning to emerge as market-leaders in fashionable household ‘feature lighting’ applications (such as downlights or soffits) where the aim is to emulate studio or commercial environments at home.

For more energy saving hacks for your home, check out this article.