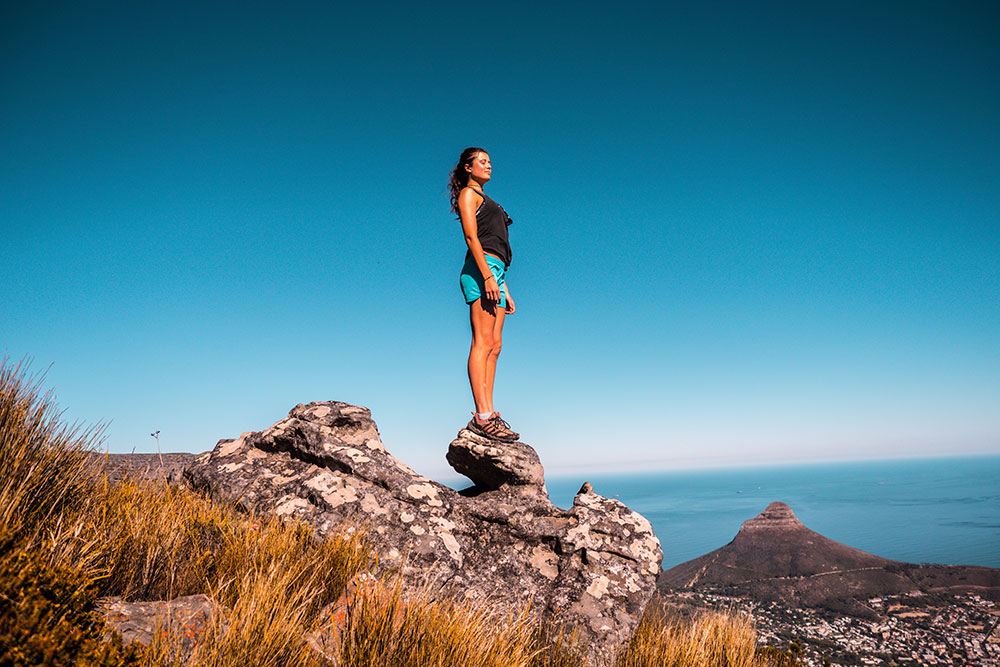 With lockdown rules the way they currently are, the Cape mountains are busier than they’ve ever been. This past Saturday, the parking area on Table Mountain looked like Camps Bay during Christmas holidays and some of the queues on the mountain resembled a Harry Potter book launch. I think this is great. The more people that enjoy the mountain the better. And passing people on the trails is the closest sense of community I’ve felt in months. It seems like many of us are realising nature can be a calming balm for the anxieties of our current lives.

With so many people headed out, we realised some might be looking for fresh routes. I also know that for unaccustomed hikers, three hours is the ideal duration. Any longer and that initial fancy can quickly turn into frustration. So these are all under that time. The following are our top five hikes to do between breakfast and lunch around Cape Town;

While Lion’s Head gets all the crowds and attention, Devil’s Peak deserves it’s fair share of recognition – many people claim it makes for an even better sunrise spot as you get a beautiful view of False Bay from up there. It’s slightly higher than Lion’s Head, however, and the final push to reach its summit always seems to go on a little bit longer than you’d guess. It’s a steep up-and-down climb so makes for a good workout but the 360-degree views offer some of the best you’re likely to find on the peninsula. It takes about an hour and a half to get to the top.

This walk is glorious. I grew up in Hout Bay so I have a deep love for ‘my’ republic and there’s almost no better place to gaze upon it adoringly than from this walk. Parking is halfway between Hout Bay and Noordhoek and the walk involves an initial climb and then stroll along the contour path towards the peak. Just before the summit, you’ll be able to peek over into the back of Noordhoek and Cape Point Vineyards. And while hopping atop the boulders at the top of the peak, you can see down to Kommetjie and Hout Bay’s Sentinel. The markets, restaurants and Italian ice cream shop in Hout Bay make for the ideal post-hike stops during normal times.

This little-used trail follows a contour on the back of Table Mountain above Hout Bay’s Valley Road. It’s an enjoyable flat route, so it’s perfect for kids or those who normally prefer the Pipe Track to Platteklip. Use the parking below Suikerbossie Restaurant at the entrance to Hout Bay. You’ll see signs of a trail leading up the mountain next to the restaurant that soon takes you above the pines and leads you into the valley. This contour path passes through patches of fynbos and dips into a few small riverine gorges. The second one is Myburgh Ravine and there’s a path that can be followed up to take you on top of Table Mountain. There’s no need to follow it all the way, rather walk upstream 200 metres where you’ll come to a lovely moss-covered, trickling waterfall. With its flat route and quiet setting, this makes for a great morning stroll.

This proves the adage that the greatest views follow the hardest climbs. As with Myburgh Ravine, park near Suikerbossie Restaurant. The path starts above the stand of pine trees and after about 250 metres there is an unmarked path leading up to the mountain to the left. This can be easy to miss so keep an eye out for it. This path follows straight up towards a ridge, where you’ll need to scramble a bit. At an outcrop you’ll have beautiful views of Hout Bay valley and Llandudno, as well as Little Lion’s Head. A contour path now follows around the mountain towards Camps Bay. Follow it to the first gorge and then start climbing. This is Llandudno Ravine and the steepest part of the hike. Huff and puff your way to the top, find a rock with a view and take in the panorama. This is a great coffee stop and the return point of the hike. It’s a fun, tough, quick hike with great views and is nowhere near as busy as the trails up the front of Table Mountain.

The Muizenberg Peak and St James Peak loop is a six-kilometre route that starts off Boyes drive, halfway between Muizenberg and Lakeside, near the sign indicating Pecks Valley. The walk climbs steeply up the mountain next to the old Lakeside quarries; from the summit you can ascend Muizenberg Peak and descend to Boyes Drive via Peck’s Valley. Alternatively, you could explore the Silvermine plateau and exit past the waterfall to the parking area at Silvermine.

After passing through a stone arch, the trail climbs gently before zig-zagging to the plateau. About 45 minutes from the start you’ll come to a junction. Muizenberg Peak is signposted off to the right and some easy scrambling gets you to the summit beacon (at 507 metres) in another 15 minutes. The cliffs drop away steeply on the ocean side and the views over Muizenberg, Marina da Gama, Seal Island and the beach that stretches all the way to Gordon’s Bay on the eastern side of the bay are awesome. Return the way you came or follow the other path from the summit, which heads east (away from the sea) along the ridge. You are now able to enjoy views over to the other side of the Peninsula, the Atlantic Ocean and Noordhoek Beach. To return to your car, go back the way you came.