Member of the plant family Allium 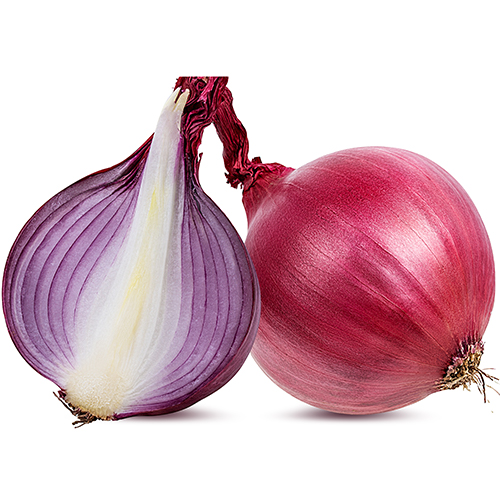 Onions are believed to have evolved in central Asia, but are now enjoyed worldwide. Onions are one of the most environmentally friendly food crops because the best practises for their growth include crop rotation, fertigation (applying minimal fertilizer through the irrigation water) and drip irrigation.

Is Onion Faithful to Nature?

Onions are a delicious, natural ingredient which can be grown sustainably and is essential to many flavourful food recipes.

Benefits: Why is Onion Used?

Onions are full of flavourful compounds.

Onion juice can provide sulphur to the hair and the scalp and thus promote stronger, thicker hair and a healthier scalp.

Good for the Gut

Fermented and pickled onions can be a good source of probiotics.

Good for the Heart

Onions contain antioxidants that may aid in fighting inflammation and lowering cholesterol levels.

Onion (powder and flakes) are used extensively to add flavour and seasoning to savoury snacks like potato chips, dried soup mixes and much more. Onion powder and flakes can also be found as single ingredient items to add your spice rack at home. Raw onions are enjoyed in salsa, pasta sauces, salads and more.

Dried onion flakes and powder are made by first mechanically tumbling and rinsing raw onions to remove the dried skin layers. Once peeled, the onions are diced and grated using simple machinery. The small onion pieces are then fed into a dehydrating oven to remove as much moisture as possible. Et voila!

Onions do not appear on the Environmental Working Group’s (EWG’s) Dirty Dozen™ 2020 Shopper's Guide to Pesticides in Produce™ but they do appear on their Clean Fifteen™ list!

The flavour and tear-inducing compounds in onions are the result of an enzyme (called alliinase) interacting with an alpha amino acid (called isoalliin).

It’s been reported that in 2008, 75% of all onions harvested in the world were harvested by hand.

Onions, garlic, chives, leeks and shallots all belong to the same genus - Allium.