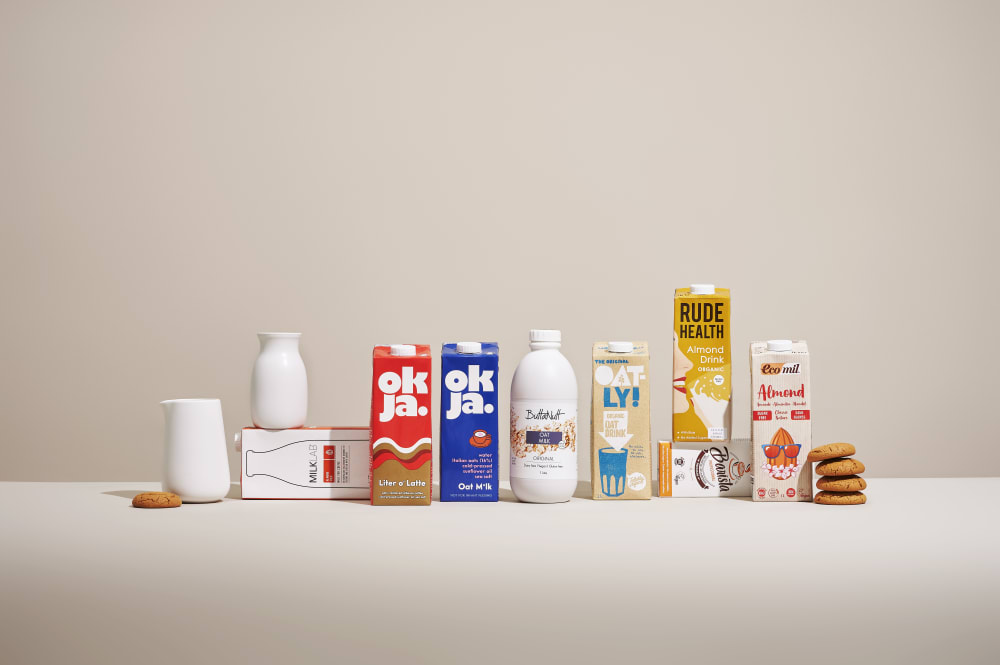 03 Sep Battle of Plant-based Milks: Soy vs Oat vs Nuts

Posted at 14:45h in Faithful to Nature, Food, Food Trends, Nutrition by Guest Writer 2 Comments
1 Like

There are plenty of non-dairy milks out there. So many, in fact, that it can be hard to know which one is best. One thing is clear though: all milk alternatives are better for the planet than the udder one.

A 2018 study by researchers at the University of Oxford showed that producing a glass of dairy milk results in almost three times more greenhouse gas emissions than any plant-based milk and it consumes nine times more land than any of the milk alternatives. (Land is required to pasture the cows and grow their feed, which the animals belch out in the form of methane.) Water is also an issue: to produce one litre of dairy requires 600L more water than one litre of soy.

Some brands simply add water to the plant matter, but many others will add various fats (like canola oil) to enhance the mouthfeel, as well as thickening, emulsifying, and binding agents (like xanthan gum, carrageenan, or sunflower lecithin) to smoothen the texture and keep the mixture from separating.

Keep in mind that not all plant milks are as all-purpose as dairy milk, and some are much better suited for, say, whipping up a latte or making a savory soup base than others. (For instance, coconut milk would make for a strange cream of broccoli soup, while rice milk is pretty watery for a coffee creamer.)

Made from ground almonds and filtered water, almond milk is one of the most popular non-dairy milks. That might be thanks in part to its inoffensiveness, in taste and texture. Thin but not watery and with a mild and neutral flavor, almond milk is pretty versatile. It works well as a good background ingredient in things like smoothies, lattes, lighter sauces. And it has low calories and the highest calcium content of all the plant-based milks.

Almonds have, however, one of the largest environmental impacts. They require more water than any other dairy alternative, consuming 60L of water to produce a single glass of almond milk, according to the Oxford study. Recent reports suggest they are also placing unsustainable pressures on US commercial beekeepers. Nearly 70% of commercial bees in the US are drafted every spring to pollinate almonds. Last year, a record number – over one-third of them – died by season’s end as a result of these pressures and other environmental threats.

According to the Oxford study, soy milk is the joint winner on the sustainability scale. Plus, it has the highest protein content of all plant-based milk alternatives. And is also a good source of calcium (when fortified) and potassium. It was the go-to alternative long before almond milk came into vogue – but then soy fell out of favor.

Soy milk has a nice, silky smooth texture. But plain, unsweetened soy milk has a taste that many people find less than palatable on its own. That’s why, when it comes to cooking with plain soy milk, it’s often best suited for dishes with other strong flavor elements—lots of garlic or spice—that will overpower the soy.

Some people hold issue with soy because it has a relatively high concentration of certain hormones that are similar to human hormones – but you’d have to consume an impossibly large amount for that to ever be a problem. It’s recommended to always opt for organic to avoid GMOs.

Oat milk performs very well on all sustainability metrics. And experts doubt there will be unintended environmental consequences that might emerge when the scale of oat milk use gets larger.

Nutritionally, oat milk also stands out. It’s high in fibre and good for your heart and gut. It’s typically higher in calories, carbs, naturally occurring sugar and fibre than almost all other non-dairy milks, and has a tiny bit more protein than nut milks – an overall filling combination.

According to Bloomberg Business, retail sales of oat milk in the US have soared from $4.4m in 2017 to $29m in 2019, surpassing almond milk as the fastest-growing dairy alternative. But unlike almonds, there are already plenty of oats to go around. Almost all of the oat production goes into animal feed, so uses for milk could take a portion of that without affecting total production.

The secret to oat milk’s popularity? It tends to emulsify into hot drinks better than other non-dairy options. Almond milk can separate when you add it to coffee. But oat milk makes for a silky smooth, creamy hot beverage.

Rice milk has very little protein or fat, so offers little in the way of nutrition compared with other choices. Environmentally it doesn’t fare that well, either. Rice uses a lot of water and produces more greenhouse gas emissions than any other plant milk. Bacteria breeding in rice paddies pump methane into the atmosphere and large amounts of fertilizer pollute waterways.

It can, however, be a kind of a miracle elixir for people with lots of allergies because it’s not made from nuts or soy and is gluten-free. Consistency-wise, rice milk tends to be the thinnest and wateriest, so is less suitable for coffee. It’s also got a surprisingly distinct taste (sweet and rich) and can be used for cooking and baking.

Macadamia Milk: one to watch

Macadamia milk is still a niche market in South Africa. One is locally produced and the other is a barista blend in high demand. Interestingly, South Africa is the largest producer of macadamia nuts in the world, predominantly exporting to China. According to Proveg, ‘With the popularity of nut milk on the rise and only one local brand using the abundance of macadamia nuts grown on South African soil, we believe there is a lot of room to grow within this category.’

Macadamia milk is low in calories but also very low in both protein and carbohydrates. It has a higher fat content, but is also high in Omega 3 fatty acids. It’s best suited for desserts and coffee.

The ‘milk of the islands’ is similar to skim milk in terms of calories and is rich in iron, potassium, magnesium, copper, manganese and selenium. It also contains lauric acid, which boosts the immune system and maintains the elasticity of blood vessels. Coconut Milk is high in saturated fats (and calories), which makes it ideal for cooking and preparing those Thai curries.

It comes in handy too if you’re looking for a fantastic dairy-free whipped cream. The process of making whipped cream is basically the aeration of fat. If you leave a can of coconut milk in the fridge overnight, the solid fad component will rise to the top and separate.

According to The Conversation, ‘Generally, the environmental performance of coconut milk is good – coconut trees use small amounts of water and absorb carbon dioxide. Yet as coconuts are grown only in tropical areas, the industrial production of this milk can destroy wildlife habitat. Increasing global demand for coconut milk is likely to put further pressure on the environment and wildlife, and deepen these conflicts.’